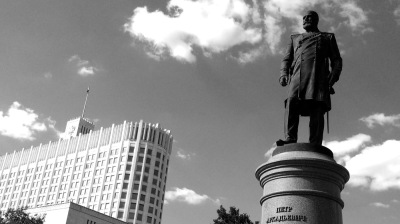 The Communist Party of the Russian Federation (KPRF) was the big winner in the Duma elections, greatly increasing its number of seats to nearly 20% of the total. / wiki
By Mark Galeotti September 22, 2021

It is tempting to suggest that between them, Vladimir Putin and Alexei Navalny, have beaten the Communist Party of the Russian Federation (KPRF). Admittedly, the elections saw the KPRF’s representation in the State Duma rise, but the suspicion is that this was a dramatic understatement of their real vote share. The question must be what – if anything – the KPRF does now?

In broad terms, this is in keeping with past years. Although United Russia’s results were down 4.38% and 19 seats from the last convocation of the Duma, it remains not just dominant, but with a two-thirds or constitutional majority. If nothing else, the KPRF has certainly pulled ahead of their perennial rival runners-up, the Liberal Democrats, who garnered just 7.55% of the vote and saw their representation in the Duma fall by 18 to 21 seats.

Then why are the Communists so angry, with an impromptu protest meeting on Pushkin Square on the day of the results, and a call for wider demonstrations? The answer is that the evidence suggests massive vote-rigging in support of United Russia, largely at the expense of the Communists. If, as some preliminary studies suggest, United Russia’s real share of the vote was more like 30% - which would reflect much recent polling – then it may even have been that in reality, the KPRF was close to equaling it. Indeed, in early stages of the voting, even the official results were giving United Russia 38% and the KPRF 25%.

This might certainly help explain not just the scale, but the unambiguity of the rigging, which reached an almost insulting pitch in Moscow itself. There two of its candidates, local KPRF head Valery Rashkin and democratic socialist Mikhail Lobanov, both emerged head and shoulders ahead in the paper ballots cast, only to have victory snatched from their grasp when the – highly untransparent – online votes were announced.

Communists in the crosshairs

Statistical analyses have already been made to identify the extensive rigging of the poll – over and above the use of voter suppression, candidate exclusion, propaganda and a plethora of other dirty tricks in advance – and no doubt more will emerge. Although there will be debate as to the exact scale and nature of the falsification, that this was a manipulated election is beyond doubt. Indeed, it may prove that for the Kremlin, or at least its political technologists in the Presidential Administration, being obvious was part of the plan.

United Russia has been a hard sell this year. Placing popular Defence Minister Sergei Shoigu and Foreign Minister Sergei Lavrov as first and second on the party list – something of an obvious snub for titular leader Dmitry Medvedev – and some eleventh-hour cash payments to pensioners and soldiers could do little to address the fundamental disaffection in the country. The economy is stagnant, living standards under pressure, and COVID a continuing spectre. United Russia lacked a big idea, a convincing narrative or particular energy, for that matter.

These are the circumstances in which an opposition party could expect to do well. The Communists, after all, can capitalise on their very powerlessness: although in practice the habitually supine leadership of the KPRF backs the Kremlin on all crucial votes, it has been able to articulate a populist message built around both traditional staples – glory to the veterans! – and the quality of life issues that are foremost in most voters’ minds.

This attempt to win over the ‘coalition of the fed-up’ had been what made Alexei Navalny’s fledgling movement so dangerous for the Kremlin, and why the Kremlin decided it had to be not simply decapitated but dismembered. The threat that the KPRF could capitalise on the inchoate disaffection within the country at large, mobilised by a younger generation of Party activists, organised through the only independent nation-wide political machine in the country, helps explain why it became the next target of opportunity.

Even before the vote, this was obvious. Symbolic, for example, was the treatment of Pavel Grudinin. The KPRF candidate in the 2018 presidential elections, was never forgiven for proving a more popular and populist figures than the Presidential Administration had anticipated. He was barred from standing on dubious grounds.

The curse of Navalny

The irony is that the KPRF may also have suffered from Navalny’s ‘Smart Voting’ campaign. An effort to encourage voters to cast their ballots tactically for whomever seemed best placed to defeat United Russia, it inevitably heavily favoured the Communists, who received its backing in 137 seats.

Navalny and his movement have been happy to claim the credit for the rise in the KPRF’s share of the vote, and it is equally striking how many Western media outlets have been quick to label the various beneficiaries of the ‘Smart Voting’ seal of approval as ‘Navalny-backed’, regardless of whether they sought this imprimatur or even approved of his politics.

We need to be cautious in assuming that the increased share of the vote won by the KPRF actually owes much – if anything – to ‘Smart Voting,’ especially given the state’s assiduous and often-farcical efforts to block access to its app and platforms. That is something that psephologists and statisticians will have to fight over. Russians are no less sophisticated in their voting than other electorates, though. While ‘Smart Voting’ may have popularised certain choices, the Russians have long understood the politics of tactical and protest voting regardless.

If anything, it may prove that Navalny inadvertently did the Communists a disservice, hence my provocative opening line. A Kremlin that was already worried about the decay in United Russia’s support would inevitably be out to ensure its victory. Indeed, this was guaranteed by its apparent desire to retain United Russia’s two-thirds majority, not necessarily because it plans further constitutional changes, but to avoid any sense of impotence and vulnerability.

However, there seems to be a genuine belief in high Kremlin circles that Navalny is not only a political danger, but that – the lack of any evidence for this notwithstanding – he is also an instrument of Western interference. The aim seems to be not just to neutralise him and his movement, but to do so in such a decisive, vindictive and gratuitous way that it stands as a warning to any others contemplating the same path.

In this case, Communist candidates given the backing of ‘Smart Voting’ needed not just to lose, they had to be trounced in an unrepentantly obvious way, such that any future contenders would not simply opt not to seek Navalny’s blessing, but actively to avoid it. Lobanov, for example, was on the list, and while Rashkin was not, he also has a reputation as being open to cooperation with Navalny and had thanked him for the support given the KPRF through ‘Smart Voting’ in the 2019 local elections in Moscow.

That Communist candidates overall had to be defeated to get United Russia its majority was inevitable. That anyone seemingly affiliated with Navalny had to be destroyed seems a choice. In the new, less ‘hybrid’ political environment of late Putinism, my enemy’s maybe-friend is certainly my enemy.

The only question is, what will the KPRF do? Veteran leader Gennady Zyuganov is huffing and puffing, but his inglorious career has demonstrated his capacity to generate outrage on demand, as a substitute rather than a spur to action. In 1996, he probably had the presidential election stolen from under him by Boris Yeltsin. In 2021, he may have had a parliamentary election stolen, too. Is this enough to get him either to act in a more serious way, or to force him finally to relinquish his death-grip on the party?

There has already been some evidence that there is pressure from within the party to abandon its position as a fake counterbalance to the Kremlin. A rising generation of younger politicians – even Rashkin, at 66, counts as such, compared with the septuagenarians currently in charge – may yet force his hand, and begin to turn the KPRF from the house trained ‘systemic opposition’ into a real opposition party.