STOLYPIN: Vpered KoZa! Can Navalny mobilise the Coalition of the Fed-Up? 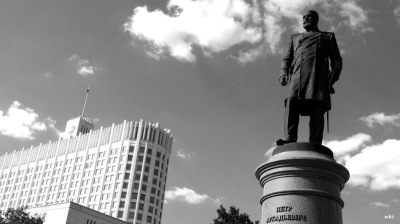 Now the dust has settled on the latest day of protests, the blood staunched and the streets again empty of riot-armoured ‘cosmonauts’, the contours of this current political struggle are becoming clearer, as is the real battlefield. It’s not Lubyanka Square, nor even the State Duma: it’s the Coalition of the Fed-Up.

Call it the Koalitsiya Zayobannykh or, less profanely, the Koalitsiya Zadolbannykh, but the KoZa is what in many ways defines Russian politics today, and the goal of everyone in this multi-player game of political Risk.

The protests, after all, were called for by Alexei Navalny and marshalled by his supporters, but although many chanted for his release and were prompted to come by outrage at his attempted murder, a great deal of the propellant force was provided rather by a general sense of dissatisfaction. Living standards are at their lowest for a decade; issues with acute local impacts, from refuse disposal to municipal services, remain fundamentally unsolved; unemployment is a serious fear.

Corruption – Navalny’s mobilising cause – remains a core national concern (in the most recent Levada tracking survey, 38% identified it as one of their greatest worries). Whether the monument to kitsch on Cape Idokapas is ‘Putin’s Palace’ or, as now implausibly claimed, an apartment hotel being developed by his trusted crony Arkady Rotenberg, is in some ways irrelevant: the story is not about any one individual, but rather an exploitative kleptocracy who have protected their own quality of life at everyone else’s expense.

KoZa in search of a party

KoZa is an inchoate beast. It is contradictory, often able still to respect Putin as the avatar of a nation pulled from the brink of irrelevance and collapse and back to global status, while despising the system over which he presides. It is fickle, happy to embrace anyone who may offer some hope of positive change, relatively unconcerned about their ideology. This is in many ways the strength of Navalny’s ‘smart voting’ scheme that relies on voters being as ready to vote KPRF as LDPR in the name of unseating United Russia (with its uninspiring 29% approval rating).

And all this makes KoZa, possibly an unmobilised, un-led and unrecognised majority, the heart of the new politics. Because the new politics are less about ideology than relevance, in a system carefully designed precisely to make politics as irrelevant as possible.

The Communist leader Gennady Zyuganov has announced that the KPRF will hold its own nationwide day of protests of 23 February – Defender of the Fatherland Day – which they promise to be ‘conscious and constructive’. (Presumably the Navalny events were unconscious and unconstructive?) He is right to worry about being outflanked, as while the Communists have benefited from KoZa’s half-hearted support in the past, that need not remain the case in the future.

In an interesting reminder of this, consider the findings of a survey of supporters of the New People Party. This recent addition to the lists, part of the latest efforts of the Presidential Administration’s political technologists’ efforts to keep the opposition fragmented, has a broadly centre-right platform especially espousing the interests of entrepreneurs and small business. According to its founder, Aleksei Nechaev, those who voted New People in the September 2020 polls could be divided into three broad categories.

There were those who definitely supported its platform, and who otherwise would not have voted. There were those who had voted for other parties in the past and who chose to support New People this time – classic KoZa. And then, most striking, there were those who had previously voted KPRF. But they had done so not because of any passionate commitment to Marxism-Leninism, but simply as a way of opposing United Russia. In other words, they were willing to vote pro-Communist yesterday and pro-business tomorrow, all in the name of being fed up. KoZa again.

The key challenge will thus be: who will finally manage to cohere it, and how?

The state’s strategy is becoming clear. A slow ratcheting up of the old ultra-violence in the hope of deterring street activism and depriving Team Navalny of the kind of momentum that built up in Belarus, calculating that the minatory effect of – quite literally – blood on the streets is more valuable than any outrage it may spark.

Meanwhile, though, it is doubling down on its usual messaging to KoZa. It has long since given up trying to win the beast’s affection, really since the dissipation of the ‘Crimea effect’. Instead, it speaks to a very powerful and up to now effective concern: that things could be worse.

After all, they could. Standards of living may have slipped but they have done so from an unprecedented high point. This is not the anarchy of the 1990s. It is not the agonised collapse of the 1980s. Putin is not even imposing the grey authoritarianism of the 1970s. The message that change – and especially change driven by street protest – is likely to be for the worse is a negative and depressing one, but it retains power.

At the same time, the Kremlin seeks to project an aura of unshakeable determination. The old men running the shop are essentially products of perestroika in the most damaged sense, who feel that the lesson of the Gorbachev era is that reform under pressure is weakness, and that weakness leads to more pressure and ultimately collapse.

I am reminded of a conversation I had some years back with a retired silovik who had lived through those days. He was smart, cosmopolitan, liberal in his personal views, but when asked what was Gorbachev’s greatest flaw, he had no hesitation in replying: “he was uncomfortable with the use of violence.”

His current crop of heirs are determined not to repeat what they feel was his mistake. They may not relish the thought of using force against their own people, but they probably will if they feel they must. And they want there to be no doubt in Russians’ minds. This is all very reminiscent of the kind of lessons Yuri Andropov taught when he headed the old Soviet KGB back in the 1970s: better a gram of deterrent today than a kilo of force tomorrow.

In many ways, the whole point of the dramaturgiya of sham opposition parties, of elections that change nothing, is not so much to fool Russians into thinking they have real democracy, but rather to make alternatives to the regime look illegitimate and pointless. Why cause a fuss and risk the ire of the state, if you cannot accomplish anything except on the most local level?

The Kremlin would love to offer KoZa something more positive. In many ways, that was the rationale behind the grandiose National Projects. But with their timetables lengthening and lengthening, for now it has only a negative message: things could be worse, and politics is fruitless at best, dangerous at worst. So settle down, watch TV, vote how you’re meant to vote, and better times will come someday.

While the KPRF leadership may continue to play fake politics, the day when this really works may be coming to an end. It is not just floating voters that are looking elsewhere. It was striking, for example, to see Communist Moscow City Councillor Evgeny Stupin – a former Investigatory Committee investigator – detained in Sunday’s protests.

But KoZa seems more fitful than ever, looking for someone who can mobilise and inspire it. Navalny’s high-stakes gamble of returning to Russia was a powerful move, but it is not likely that street protests alone will be enough, especially as the state is clearly willing to respond with force. Can Team Navalny maintain and extend their national network and act as a party de facto? Can they form alliances with other movements and even subvert and co-opt members of other parties, from the KPRF to the new Just Russia – For Truth composite? Can they craft a message beyond contempt for the ‘Party of Crooks and Thieves’?

This is the real battle: to inspire and unite KoZa, to give it enough hope to overcome the Kremlin’s calculated balance of apathy and fear, and – perhaps hardest of all – to find a way of turning street power into political change without forcing a soft authoritarianism to become a hard one. It’s just the start of a long journey.

Mark Galeotti is director of the consultancy Mayak Intelligence and also an honorary professor at UCL School of Slavonic & East European Studies.