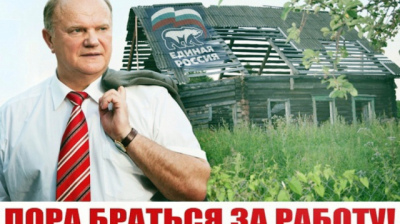 The Communist Party of the Russian Federation (KPRF) made large gains in Russia’s Duma elections over the weekend in a major upset for the Kremlin, but the ruling United Russia has retained its majority.

United Russia saw its share of the vote fall to 38% from 54% in the last elections in 2016, despite widespread falsification, according to preliminary results.

But the big winner in the election was KPRF, which saw its share increase from 13% to 25%, RT reports as the voting results come in. The party has been the biggest winner of jailed anti-corruption activist and opposition politician Alexei Navalny’s smart voting tactic, despite a big effort by the Kremlin to crush the initiative.

The Liberal Democratic Party of Russia (LDPR) of firebrand nationalist Vladimir Zhirinovsky was returned to the Duma with 9%, and the systemic opposition liberal party of Just Russia (aka Fair Russia) also won 6%.

The New People party that was created a year ago as a Kremlin project to steal votes from the liberal opposition voters also appears to have cleared the 5% threshold to win 6%, according to early results.

The vote count continues, but if these results are confirmed then the result will be a major upset for the Kremlin, which pulled out all the stops to render Team Navalny smart voting ineffective. As bne IntelliNews reported, the KPRF was expected to get a big bump from smart voting, as almost two thirds of the candidates it benefitted were from the KPRF.

The Kremlin went out of its way to suppress distribution of Team Navalny’s smart voting recommendations by closing down the Team Navalny website and successfully bullying both Google and Apple, which both agreed to remove the Navalny app from their stores. Google and YouTube also removed the list and a video with the list from their servers.

But despite the largely successful efforts by the Kremlin to suppress the lists the smart voting tactic appears to have worked as voters used their ballots to protest against United Russia’s failure to tackle the stagnation of incomes over the last six years and voted for the leading non-United Russia candidates anyway, even if they didn't have access to the lists.

There were several major upsets, according to the preliminary results. Twelve or 13 seats out of a total of 15 single-mandate seats in Moscow were lost by United Russia, home to Russia’s biggest opposition voters. United Russia also lost all the single-mandate seats in St Petersburg, also an opposition stronghold. Leonid Volkov, the head of the Team Navalny who is in exile in Latvia, said the victories by United Russia in the capital were due to falsification.

In St Petersburg even opposition candidate Boris Vishnevsky won his seat, despite having to campaign against two other Boris Vishnevskys who had changed their appearances to resemble the candidate as much as possible in the hope of confusing voters and splitting his vote.

In the Far East the whole of Yakutia was won by Communist candidates with 35% of the vote to United Russia’s 33%, in the first time that the KPRF has taken an entire region, and one of Russia’s biggest. The Communists also did well in Siberia and the rest of the Far East.

However, despite all these surprises United Russia was on track to win 189 of the 225 party list seats. With 25% of the vote counted United Russia was also on course to 183 of the 225 single-mandate races, which have been the focus of the smart voting campaign. As the biggest party United Russia tends to dominate the partly list voting and in some regions it fields no candidates to allow the other systemic opposition parties of the LDPR and Just Russia to win enough seats to get into the Duma. However, the single-mandate seats are an open, and often relatively fair, race where opposition candidates often have a real chance of winning.