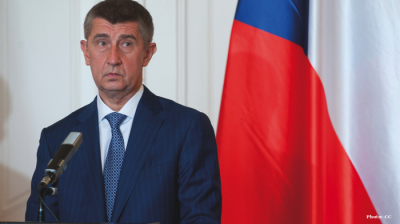 However, Saroch’s decision does not automatically mean that Babis is no longer prosecuted. His decision still has to be approved by the Prague municipal state attorney’s office leadership. Saroch’s supervisors now have to review his procedure and the final decision, and then decide themselves whether charges against Babis will be dropped.

“The supervising prosecutor submitted his final decision in the case labelled in the media as the ‘Stork’s Nest affair’, in which he changed his original legal opinion. The chief public prosecutor of the Prague Public Prosecutor's Office is now familiarising himself with the final decision and he will review it and also consider whether the change is legal and legitimate,” stated spokesman of the Prague Public Prosecutor's Office Ales Cimbala.

Saroch was due to decide in the case by the end of last month. As the chief of the High Prosecutor's Office in Prague Lenka Bradacova told Seznam Zpravy, the state attorney would decide whether Babis and others accused in the Stork’s Nest case would be charged by the end of August. She also said that her office had reviewed the EU audits and forwarded them.

According to spokesman of the Czech Union of Public Prosecutors Ondrej Stastny, the union has no information about the decision in the Stork’s Nest case. “If the Prague Public Prosecutor's Office stated that the supervising prosecutor has changed his legal opinion, it is expected that convincing reasons will be provided, also with respect to the length of prosecution,” Stastny told Czech Radio.

Babis said to the media that he and his lawyers have not been contacted in this matter yet and therefore he cannot comment on the news. However, he denied exerting influence in the case, and noted that “if anyone influenced the state prosecutor, it was the protestants at the Wenceslas Square,” adding that the prosecutor’s office works under pressure from the media and various interest groups.

Yesterday, during an interview with FTV Prima, Babis expressed his belief that the state prosecutor is going to drop the charges and even if it does not, he has no intention of resigning from the government. “I hope that a decision will be in my favour, because only then will I have a feeling that we have justice,” he said.

Opposition leaders, as the Czech News Agency reported, respect the state prosecutor’s decision and would like to wait for more information. Ivan Bartos, leader of the Czech Pirate Party noted that if it was not the PM being investigated, the person would be already standing trial or even in jail. He also said that he finds Saroch’s decision a “surprising u-turn”.

Petr Fiala, chairman of the Civic Democratic Party, warned that after a sudden change of justice minister in spring and media pressure on the PM, the public cannot have faith in the justice system. Jiri Pospisil of the opposition party TOP 09 sees as crucial how Sachor will explain his decision, while STAN chairman Vir Rakusan would rather see the PM’s case being decided in court. Christian Democratic leader Marek Vyborny thinks that even if the decision was in line with the law, it was ethically wrong.

Czech police recommended in April Babis should be indicted for alleged fraud in EU subsidies. “The investigation of the ‘Stork’s Nest case’ carried out at the local state prosecutor’s office is over. The complete file has been submitted to the state prosecutor with a recommendation for an indictment,” Cimbala said.

The second audit report arrived at the Permanent Representation of the Czech Republic to the EU on June 5. According to the Czech News Agency, it is likely that Agrofert will have to return all investment agricultural subsidies it has received since February 2017, but that will not affect the so-called direct payments that are paid to all farmers in the EU.

At the beginning of August, the municipal office in Cernosice announced a second decision in the case of the PM’s alleged conflict of interest. The council did not make the decision public. The case was returned to the Cernosice office in March, when the Central Bohemian Regional Office cancelled its decision concerning Babis’ conflict of interest case, due to his alleged influence over the management of Mafra Group media, and returned the matter for reconsideration.