SocGen on the ropes in Russia

Leading French bank Societe Generale (SocGen) had high hopes for Russia, but those dreams are rapidly unraveling. In the latest gust of a ground swell of bad news, the CEO of its Rosbank subsidiary was arrested on corruption charges on May 15, accused of accepting a RUB5m ($160,000) bribe and demanding another $1.5m.

"The bank's chief executive [Vladimir Golubkov] demanded $1.5m from a commercial organization representative to prolong a loan agreement and to sign an additional agreement, with a lower interest rate and monthly payments. He asked the businessman to deliver the money to a senior vice president of the bank," the Interior Ministry said, reports Ria Novosti.

SocGen has yet to comment on Golubkov's arrest, but it must be worried that its $5.2bn bet on Russia is falling to pieces fast, and it needs to turn its crumbling operation around this year or face mounting pressure from investors to cut its loses and pull out of Russia completely.

Golubkov has worked for Rosbank since 1999 and was made CEO in September 2008. Demanding backhanders in this way is a widespread practice in Russia's banking system, but it's unusual to find at a foreign-owned bank, which normally strive to stick to international best practices. The story highlights just how hard foreign banks are finding it to operate in Russia.

The arrest comes on the back of a very poor year for Rosbank, which lost $2.6m last year, but is expected to make a small profit this year, though that's far from the $150m a year of profit that analysts say it should be putting in to keep its investors happy.

Pre-crisis, the acquisition of Rosbank in 2006 looked like a good idea and the deal was hailed at the time as the biggest foreign acquisition in the market. But the crisis has changed all that. Russia's banking sector is growing half as fast as it was in the boom years, and the big state-owned banks are becoming increasingly more aggressive competitors.

Indeed, all the foreign banks in Russia have been feeling the heat and several of the late arrivals have already pulled out, writing off heavy investments. Barclays and HSBC have both shuttered their Russian universal banking operations. All in all, the non-resident share in Russian banks' capital had slipped to 26.5% in the first quarter of this year. And this was despite a huge contribution to the sector capital made by Chinese investors to open a unit of China Construction Bank, which has put China among the top-10 countries by investments in the Russian banking sector.

It wasn't meant to be

It wasn't supposed to turn out like this. Over the last decade, SocGen has built up a string of financial assets in Russia. It launched its own retail bank, Barings Societe General Vostok, which was merged into Rosbank in 2011. It also bought Rusfinance, which specialised in auto loans, and mortgage lender DeltaCredit. But the cherry on the cake was the 2006 acquisition of the 82% stake in Rosbank it bought from oligarch Valdimir Potanin. The deal lifted the French group into the top-ten biggest banks in the country, with 600 offices in 340 cities and towns across Russia. SocGen has since been consolidating all these assets under the Rosbank brand and was vying to become the largest private bank in Russia.

In May, the bank dropped out of the top-five retail operations in Russia, giving up its place to the express credit king Russky Standard Bank, which increased its loan portfolio by 11.5% over the first three months of the year against Rosbank's 2.5%. In general, the bank's retail credit growth has been a third of the sector average - 1.1% versus 3.3% a month - since August 2011, according to Frank Research Group (FRG). These results are well off the bank's own 2015 targets of a 25% growth in retail loans and 15% growth in corporate loans.

The bank says that it is following a more conservative lending strategy, eschewing the higher risk lending to small borrowers that Russky Standart prefers and concentrating more on things like mortgage loans. However, according to bne sources, another problem is that any loan bigger than $20m has to be approved by the head office in Paris, which can be such a slow process that it often loses corporate business to its nimbler Russian competitors.

At the same time, an increasing number of loans are going bad, due to the current economic slowdown. In 2012, Rosbank tried to clear out the deadwood by selling off RUB8bn of overdue debt to the increasingly popular semi-legal debt collection agencies. Retail lending has been booming and increased by just under 40% for the sector as a whole last year, but as the economy slows analysts are worried that a growing number of these loans are going bad. In the middle of May, Russia's central bank reported that 22% of Russian credit card holders had reneged on their debt.

Some investors are already calling on SocGen to bail out of the Russian market. But it would be an expensive call if acted on. JP Morgan estimates the current worth of the bank is €2.2bn using a one-times book value multiple, which is half what SocGen paid for its Rosbank stake. 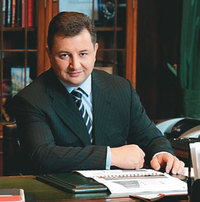