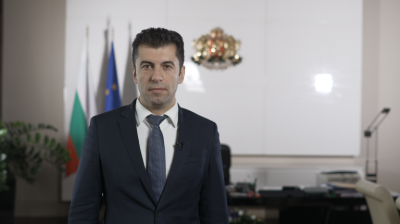 Bulgarians expressed anger and shame after a call by Prime Minister Kiril Petkov on Facebook for citizens to make financial donations directly to Ukraine to buy weapons after the ruling coalition failed to find a compromise on this issue.

Petkov’s Change Continues formed a four-party coalition to put an end to months-long political instability last year. One of the parties, the pro-Russian Bulgarian Socialist Party (BSP), is blocking any attempts by the government to provide military aid to Ukraine, while another member of the coalition, Democratic Bulgaria, is threatening to quit if the country does not send weapons. Petkov’s party is trying to balance between the two positions.

“I call on every Bulgarian citizen who really wants to help Ukraine to donate one salary like me. Words are easy, actions are difficult, it is time for Facebook posts to turn into funds for Ukraine. The state [comprises] all of us and anyone must feel that he can be part of the solution,” Petkov wrote on Facebook.

His initiative sparked anger among Bulgarians who are already volunteering and supporting Ukraine and refugees from the conflict in any way they can, including providing free accommodation, transportation from war zones, food, money, medicines and free medical care. Many also donate funds to NGOs in Ukraine that are acquiring military equipment for the army.

Petkov was accused of being coward and of not being a leader at the time of war.

“The elite is chosen to lead, not to waver between appropriate points [of view] ... nor to take the shameful decision not to send a representative to Ukraine as the BSP did,” political analyst Evgeniy Daynov commented in an interview with public broadcaster BNR.

Petkov has said that he will lead a delegation to visit Ukraine. However, the BSP decided not to send a representative despite being part of the ruling coalition.

The prime minister was criticised for not taking firm leadership in this tough situation and people urged him to lead the country.

“This war changes everything. From now on, every politician who was acting, or every public figure during the war, will be judged for what they did during the war. Even if you try to hide from the winds of war, they will still reach you. The whole world realised that Bulgarians are mice. I am ashamed of that,” Dainov said.

His opinion was widely backed by citizens. Petkov was also criticised by his coalition partners. Slavi Trifonov, the leader of There Are Such People (ITN), wrote on Facebook that the prime minister's initiative was "stupid".

“The idea of Kiril Petkov, who is a prime minister, for Bulgarians to donate money for weapons to Ukraine is the most monstrous nonsense I have ever heard,” Trifonov wrote.

Meanwhile, the gratitude expressed to Petkov by Ukraine’s Foreign Minister Dmitro Kuleba on Twitter was interpreted as rather ironic than true.

“Grateful to Prime Minister of Bulgaria Kiril Petkov for initiating a public campaign to raise funds for Ukraine and help us strengthen our defences. This move demonstrates true Bulgarian solidarity with Ukraine. I felt it well when I was received by PM Petkov in Sofia last week,” Kuleba wrote.

The post contrasts with Kuleba’s harsh criticism of Bulgaria over the lack of decisive steps towards providing much-needed military aid to his country during his visit to Sofia last week.

At the same time, Ukraine’s Deputy Prime Minister Olha Stefanishyna also urged Bulgaria to provide weapons that would support Ukraine’s euro-integration by helping it win the war and guarantee its stability.

Meanwhile, the New York Times reported that Bulgaria has been exporting weapons to Ukraine via a US company.

Bulgaria, along with five other countries, sells Soviet-era weapons and ammunition to Ukraine through the US company Ultra Defense Corp., based in Tampa, Florida, according to the New York Times. The company works with arms factories in Bulgaria, Romania, Bosnia, Serbia, Slovakia and the Czech Republic, which provide the so-called "non-standard ammunition".

There were no details on the amounts of weapons allegedly exported by Bulgaria. Economy Minister Kornelia Ninova, who is also the leader of the BSP, denied the claims.