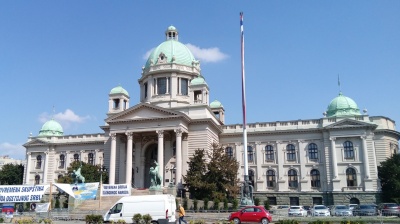 Borko Stefanovic, deputy leader of Serbia's opposition Party of Freedom and Justice (SSP), wants to open a debate on Belgrade's decision not to join sanctions in the Serbian parliament. / Clare Nuttall
By bne IntelliNews August 17, 2022

Borko Stefanovic, deputy leader of Serbia's opposition Party of Freedom and Justice (SSP), told N1 on August 16 that he will initiate a debate within the Serbian Parliament Foreign Affairs Committee on aligning Serbia’s foreign policy with that of the European Union.

Serbia is an EU candidate country but so far has refused to align itself with sanctions on Russia imposed over the invasion of Ukraine, due to its historic friendly relations with Russia and Moscow’s support for Belgrade’s refusal to recognise Kosovo as independent. This has caused tensions between Serbia and EU officials.

The topic is a controversial one as public opinion in Serbia is strongly against imposing sanctions on Russia. A June poll from Demostat showed overwhelming support for Russia and opposition to joining Western sanctions among the Serbian population. According to the poll, 80% of respondents oppose sanctions on Russia, while only 9% are in favour. 81% believe that Serbia should preserve its neutrality at all costs.

However, Stefanovic told N1 that he plans to initiate a debate first within the Foreign Affairs Committee and later in the parliament on the issue.

“All European countries have taken restrictive measures against the Russian Federation, and in this situation Serbia does not have much to think about, our future is in the EU,” Stefanovic told N1.

He argued that the repercussions of Serbia’s position — in terms of the economic and relations with the EU — mean a lot for the country.

Despite Stefanovic’s plans to open the debate on whether Serbia should join sanctions on Russia, the SSP’s influence is limited as it is in opposition. Serbia’s new government is due to be formed in the near future by President Aleksandar Vucic’s Serbian Progressive Party (SNS), which won another victory in the April 3 general election.

Immediately after polls closed on April 3, Vucic said that while EU accession is a priority for Serbia it does not pla to abandon its “traditional friends”, namely Russia. He has since reiterated this position several times.

This is despite Serbia being under pressure from EU officials and politicians from some EU member states to align its policy with that of the bloc.

A report backed by MEPs “strongly regrets” that Serbia has not aligned with EU sanctions following Russia’s invasion of Ukraine and called on the authorities to urgently align with the EU’s decisions against Russia.

In June, German Chancellor Olaf Scholz stated at a meeting with Vucic that Brussels expects Serbia to back sanctions. “That's why it's so important that the European Union and that we all stand in solidarity with Ukraine and help it defend itself against this attack,” he said. “Our expectation is that these sanctions will also be supported by all those who are candidates for EU membership.”