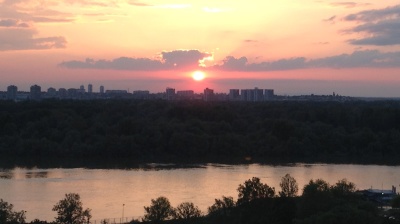 Red sky over Belgrade: the IMF commends Serbia for its reforms and recent strong growth but warns of actions needed to support the economy in the longer term.
By bne IntelliNews May 21, 2019

The International Monetary Fund (IMF) praised Serbia on May 21 for implementing most reform targets and achieving robust growth, while saying it is crucial for the country to maintain a balanced policy mix to promote sustainable expansion.

"Growth is robust, public debt is declining, inflation is low and stable, and many key reforms have been implemented," the IMF said in the concluding statement for the 2019 Article IV Consultation and the Second Review under the Policy Coordination Instrument (PCI) released after the end of an IMF official staff visit to Serbia.

Serbia’s economic growth in 2019 is projected by the IMF at 3.5%, with a pick-up in growth expected during the second half of the year due to strong foreign direct investment (FDI), continued public investment, and assumed recovery in trading partner countries.

Serbia's inflation is expected to move within the lower half of the inflation target band, of 3%, while the current account deficit as a share of GDP is expected to widen modestly and remain fully covered by FDI.

"The recent relaxation of fiscal policy, with a deficit of about 0.5% of GDP targeted in 2019 and over the medium term, remains appropriate. This provides some fiscal space, which should be reserved for capital investment, while reducing public debt further," the IMF underlined.

Looking ahead, according to the Fund, “even more important than near-term growth is ensuring that the structural drivers of growth over the medium term are solid.”

Improving the private investment climate through the better provision of public services, reduction of the grey economy, anti-corruption efforts and providing legal certainty should remain government priorities, it said. Another area where action is needed is addressing the brain drain: “Ensuring opportunities for skilled workers within Serbia will be critical to limit ‘brain drain’. Education and training opportunities to prepare students and workers for the modern economy will be key as well as regulations that address business needs,” the statement said.