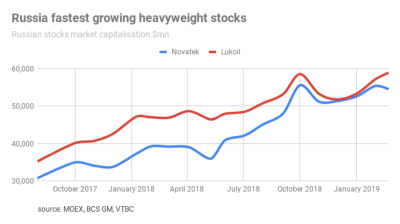 Russia's most valuable state owned stocks valuations are range bound, but the privately owned companies have almost doubled in value in the last year / bne IntelliNews
By Ben Aris in Berlin February 24, 2019

Russia’s state owned retail banking giant Sberbank is back on top as Russia’s king of the castle – the most valuable stock on the Russian equity capital market, worth a massive $69.4bn as of February 22.

An investor’s darling because it is seen as a proxy for the whole Russian economy, the one-time Soviet dinosaur has managed to remake its image over the last decade as not only one of the most attractive stocks, but also oddly enough for a massive state-owned company, as one of the most progressive and innovative companies on the Russian market.

Sberbank’s CEO German Gref can take a lot of credit for that. The former economics academic drew up the so-called Gref Plan in 2000 and was tasked by Russian President Vladimir Putin personally to put it into action. Gref had mixed results, but the now forgotten episode was the first attempt to systematically reform the workings of the Russian economy since the fall of the Soviet Union. Gref’s predecessor Yegor Gaidar did big things like free prices, as recommended by the International Monetary Fund (IMF), but Gref started on the little things like reducing the number of permits needed to start a business.

Gref brought the same thinking to Sberbank, which was the epitome of a Soviet institution when he took over. The bank had tens of thousands of shabby branches across the entire territory of the country, with famously surly staff. Gref cut the number of branches by two-thirds, introduced one of the most sophisticated IT systems in all of Europe, spruced up the bank’s office and put the bank into handsome profit. Sberbank now regularly earns over 20% return on equity – one of the highest in the sector – and made RUB811bn ($12.4bn) in profits, a massive 78% increase y/y. Gref is confident this year the bank will easily clear the trillion rubles ($15.3bn) of profit mark and no one really doubts him.

Oil prices surged in the second half of last year and Rosneft was on a roll. The oil major is also widely profitable, making more money in just the first quarter of 2018 than it made in all of 2017 as oil prices surged.

And adding to the dynamic, the US government has threatened to impose “crushing” sanctions in Russia that autumn raising speculation these would target Sberbank directly and could cut it off from the western financial system entirely. Many investors decided to play safe and take profits.

Nothing happened in the end as the debate on the sanctions was delayed because of the mid-term elections, but now the elections and holidays are over the draft bill was reintroduced last week.

Despite the fears Sberbank overtook Rosneft again at the end of January as equity investors drift back into the Russian market. The leading dollar denominated Russia Trading System (RTS) index is currently up by 10% YTD and the ruble denominated Moscow Exchange Index (MOEX) up by about 6% as fresh funds arrived on the back of improving sentiment for emerging market stocks since the start of this year.

The capitalisation of the state bank exceeded RUB4.51 trillion against Rosneft’s market cap of RUB4.46 trillion as of the end of January.

As of February 22 Rosneft’s market cap had made some small gains to $65.0bn but Sberbank has shot past it again and had a market cap of $70.5bn to put it clearly in the lead – the threat of new sanctions notwithstanding.

Sberbank has become a so-called “tourist stock” – if an investor has an appetite for Russian risk then the first stock they buy is Sberbank. In the past the same role was played by oil major Yukos during the boom years, until its owner Mikhail Khodorkovsky was arrested and then jailed in 2013. And Gazprom shares were also a proxy for Russia in the second half of the noughties, where at one point its CEO Alexy Miller boasted that the company was on track to become the most valuable company in the world, predicting its market cap would top $300bn. Gazprom’s market cap this February was $53.8bn and hasn't really moved from there for several years.

While Sberbank’s stock has recovered most of the ground it lost during last September’s sanction scare, it is clearly still well down from its previous peak when the bank’s market cap topped $100bn in March 2018. The threat of more sanctions and the slow pace of economic growth has capped the whole market which has remained range bound around the RTS index 1,000-1,200 since the annexation of the Crimea in 2014. That is half the RTS’ all time high of 2,487 set on May 19, 2008, just before the US-induced global financial crisis hit that September.

Rosneft’s share price has been falling too since the start of the year after oil prices dropped from an average of over $75 in the last quarter of 2018 to an average of $56 in January. On top of that a political crisis in Venezuela has hurt the company where Rosneft has several projects.

While the state-owned heavyweights remain exposed to sanctions, in addition to the market forces and oil prices, the same seems to be less true of the big independently owned companies at the top of Russia’s equity tree.

As the second chart shows more clearly, both privately owned oil company Lukoil and privately owned gas producer Novatek have seen their stock almost double in value in the last year from around $30bn to around $60bn. Indeed Lukoil’s market cap of $59bn as of February 22 is just shy of Rosneft’s $64bn despite the fact that Lukoil has half the oil reserves that the state-owned oil giant has.

Clearly, despite their size and huge valuations, all of Russia’s leading state-owned companies are badly undervalued at the moment as geopolitics weighs on their share prices.

CEPR's action plan for Ukraine's wartime economy
1 hour ago
Missiles or sabotage: What caused the explosion at the Russian airbase in Crimea?
3 days ago
Population decline to take Emerging Europe back to the early 20th century
3 days ago
Czech government remains colour blind on green issues
3 days ago
Poland ups the ante in feud with Brussels over judiciary reforms
4 days ago