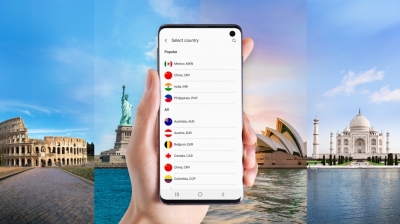 Samsung has no plans to put Tehran on the skyline. / Samsung.
By bne IntelliNews February 13, 2020

Samsung has blocked access to parts of its Galaxy Store to Iranian users, Farhikhtegan newspaper has reported.

The Korean tech giant notified users in Iran in January that their use of the online store was set to become limited to “free apps”, with payment gateways shut down in a belated response to US sanctions targeting foreign companies still doing business with Iran. Samsung is reportedly the single biggest handset provider in Iran, with its market share in 2018 standing at around 55%. In August 2017, Apple removed Iranian applications from its App Store and the following March blocked locally-made apps Iranians were still accessing by closing a loophole. In September 2017, Google deleted Iranian apps from its Google Play Store.

The IT Organisation of Iran responded to the Samsung move by calling on the company to reverse its decision or face consequences such as the non-renewal of visas held by employees working in the Islamic Republic. Mohammad Jafar Nannakar, legal director of the organisation, said: “Correspondence is under way to give Samsung a legal ultimatum so that it knows that it is violating Iranian market policies.”

He added: “We have contacted [them] and I don’t know if they have received our correspondence or not… but, if [Samsung] has received [the letters] and are continuing with this policy [to ban access to parts of the Galaxy Store] against the Iranian market, Korean nationals working in Iran working for Samsung, will not have their visas renewed.”

In February 2018, there was a diplomatic spat between Tehran and Seoul when Iranian and North Korean Winter Olympics athletes were initially blocked from a giveaway of limited-edition Samsung Galaxy Note 8 smartphones, reportedly due to Samsung executives' fears of breaking US sanctions.

In recent years, Chinese technology companies including Huawei—which given national security bans in the US would seem to have little left to lose by breaching Washington’s Iran sanctions—have moved in on the Iranian market, offering low-cost smartphones to customers who pay upfront for their devices.

Iran’s technology industry, meanwhile, has developed equivalent application stores including “Sib” (“Apple” in Persian) for iPhones and iPads while Android users can access several stores including Café Bazaar. In July last year, it was reported that a home-made Android operating system had been designed and developed by a group of IT experts at Iran’s Sharif University of Technology, often dubbed the “MIT of Iran”.

The woes of Iran’s internet users reached a nadir last November when officials shut down access to the global worldwide web for six days after the introduction of a big petrol price hike sparked social unrest across the country.

Analysts expressed fears that regimes around the world would be encouraged by how effectively Iran in a ‘world first’ managed to disconnect such a big population—Iran is home to 81mn people—from the global internet while keeping internal market and other systems working using its so-called “halal net”, a closed-off version of the internet similar to China’s “Great Firewall”.

Kazakhstan: Sanctions likely behind fresh delay at new Baikonur launchpad
1 day ago
EWDN: How Russian game developers are being hit by the shockwave of war
2 days ago
Disney+ comes online in Turkey
3 days ago
Romanian crowdfunding platform SeedBlink helps Bulgarian startup Agriniser raise funds
8 days ago
Investments into Serbian startups soared more than 600% in 2021
8 days ago