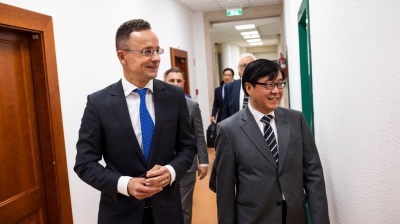 South Korea's Samsung SDI will expand production capacity at its electric vehicle battery plant on the outskirts of Budapest from a HUF390bn (€1.2bn) investment, it was announced on October 10. The investment will create 1,200 workplaces and could make the plant one of the largest globally.

Minister of Foreign Affairs and Trade Peter Szijjarto did not discose the amount of non-refundable grant for the project, as it needs to be approved by the European Commission.

The size of the grant will be in proportion to the size and importance of the investment, he said. The HUF390bn investment is the third largest in Hungary since 2016, according to a compilation by local business portal Portolio.

Daimler announced to open a new production facility at its Hungarian unit in 2016 from HUF490bn. The second largest investment in the last couple years kicked off last month, when MOL laid the foundation of a HUF400bn polyol plant.

Samsung's investment means that Hungary will be one of the fortresses of the European automotive industry in the new automotive era, Szijjarto said.

Samsung SDI opened its first electric battery plant outside of South Korea in 2016 in Hungary from a HUF100bn investment. It overhauled an existing facility in the small town of God, north of Budapest where it produced screen panels for plasma TVs until its shutdown in 2014.

Samsung picked Hungary due to its proximity to large European carmakers and the closeness of European markets In addition, the company gains competitive advantage in the battery industry by devising an integrated system, creating synergy with the SDI BS (Battery Systems) plant in Austria, acquired by Samsung in 2015.

The plant will produce enough batteries each year to supply 50,000 electric vehicles.

Samsung SDI CEO Woo-Chan Kim said the company is investing more than €1bn in Hungary and said it remains committed to expanding its local operations. With the expansion, the Hungarian plant could be one of the largest globally.

Hungary strives to be a leader in electromobility in the region. So far three South Korean e-car battery makers the country for their production sites.Inzi Controls were the latest to set up a production base, following the footsteps of SK Innovation and Samsung SDI.

Not everyone cheered Samsung's expansion in the town of 20,000. 500 people signed a petition protesting against the invesment.

International IT companies that have quit the Russian market setting up in Serbia alongside Russian tech companies.