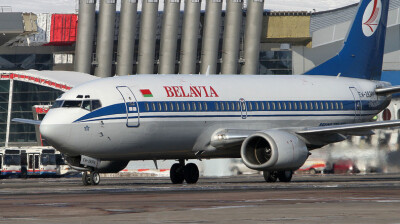 The forced landing of the Ryanair plane in Minsk to arrest journalist Roman Protasevich has caused outrage, but it's not the first time that air traffic control has forced planes to land so their passengers can be arrested. / wiki
By bne IntelliNews May 26, 2021

European politicians erupted in fury after the commercial Ryanair flight was ordered to land on May 23 in Minsk and top Belarusian opposition journalist Roman Protasevich was arrested. but it is not the first time this has happened.

In February this year Ukraine’s general prosecutor forced a private jet carrying former first deputy head of PrivatBank Volodymyr Yatsenko to land after he tried to flee the country.

"According to operational information, the former official planned to leave Ukraine on a private jet in the direction of Vienna, having departed from Dnipro. Due to the efforts of the head of the group of detectives and the director of the NABU, who contacted the State Aviation Administration, the plane landed at Boryspil Airport, where urgent investigative actions have been started," the general prosecutor’s office said on February 21.

As in the Ryanair case, the plane was ordered to land by Ukraine’s Air Traffic Control and the pilot was force to comply, although in that case there was no subterfuge of claims of non-existent bombs.

Ukrainian President Volodymyr Zelenskiy has launched a crackdown on the oligarchs and the arrest of Yatsenko was the first sign that the president was serious about roping in the runaway power and influence of Ukraine’s oligarchs.

More controversially, Russia’s state-owned RT has been making hay from an incident when then-President of Bolivia Evo Morales' plane was forced to land in Austria after several EU countries closed their airspace to the aircraft in June 2013.

The president was on his way home from an energy conference in Moscow and Bolivia had recently been in talks with US intelligence whistle blower Edward Snowden on possible political asylum. Snowden was at the time stranded in the international departure halls of Sheremetyevo airport and eventually was let into the country, where he remains to this day. It was widely assumed that the US had strong-armed the EU authorities into bringing the plane down in an EU country, as the US believed that Snowden was on board the plane.

The plane was searched but the fugitive was not found; the Bolivian plane had left from Vnukovo Airport, not Sheremetyevo.

The incident caused an international scandal, with several South American countries accusing the US and the EU of colonialism. WikiLeaks founder Julian Assange later claimed the US had fallen for a ruse by his team, who were discussing the possibility of smuggling Snowden out of Russia on a presidential plane of another country, but had mentioned Bolivia on purpose to misdirect US intelligence.

And there was a second incident of a plane being forced to land to make an arrest in October 2016 involving a Boeing 737-800 on its way from Kyiv to Minsk operated by Belarusian flag-carrier Belavia.

The plane left Kyiv’s Zhulhany airport with 142 occupants and was half way into the flight when Ukrainian ATC ordered the plane to turn round and return to Kyiv. In that incident too the pilot was told that fighter jets would be dispatched if he did not comply.

Once the plane had landed Ukrainian law enforcement officials removed an Armenian passenger who has been identified as the reporter Armen Martirosyan, aligned with the anti-Maidan movement which opposed the Ukrainian government and its closer ties with Europe. He was detained only briefly and departed on another Belavia service to Minsk within three hours, the airline said.

Belarus’s foreign ministry formally protested to Ukrainian’s diplomatic mission over the authorities’ actions to “forcibly return” the Belavia aircraft. “The Belarusian side expects an official apology and demands reimbursement of all financial costs and expenses caused by the actions of the Ukrainian side,” it stated at the time as cited by Flight Global.

Ukrainian state security service SBU reportedly dismissed Belavia’s claims that air traffic control had threatened to deploy combat aircraft during the incident, suggesting that claims of such a measure against a civil aircraft were absurd.

Russia resumes oil supplies to Slovakia and Hungary but imports to Czechia remain halted
Poll shows every other Russian supports continuing the war against Ukraine
Ukraine will receive $5.5bn in support from the US later this month

Government claims three quarters of foreign companies in Russia are still working
7 hours ago
Moldova says it won't be able to make next payment to Gazprom
7 hours ago
Russia resumes oil supplies to Slovakia and Hungary but imports to Czechia remain halted
7 hours ago
US charges Iran operative with plotting to kill former Trump hawk John Bolton
16 hours ago
Ukraine will receive $5.5bn in support from the US later this month
1 day ago