Russian vote through changes to constitution in referendum, Putin cleared to rule until 2036 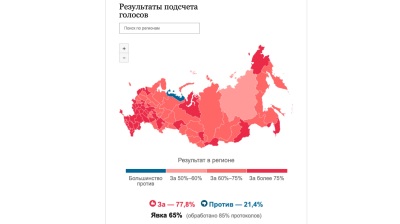 As reported by bne IntelliNews, the main amendment in focus is that allowing current President Vladimir Putin to run for another two six-year presidential terms in 2024.

The national result tallies with an exit poll run by the state-owned pollster, the Russian Public Opinion Research Centre (VTsIOM), which found over 70% of the respondents at 800 exit polls who agreed to anonymously share their vote. Out of those, 76% supported the amendments and 24% voted against, according to VTsIOM.

Only one region – Nenets Autonomous Okrug that sits on Russia’s extreme far northern coast – had a majority No vote against the amendment package. Nenets is one of Russia’s most sparsely populated regions with only 44,000 residents, who mainly work in the oil industry.

Observers have highlighted some of the most extreme results that strongly suggest the vote was tampered with. With all ballots counted in the Tuva Republic, official figures say that аn eye-watering 97% of those voting said "yes" to Putin's reforms. Other reports revealed how state-owned companies were co-ordinating and forcing employees to vote for the changes.

Russia started early voting in its controversial referendum on changes to the constitution on June 25 that will reset the presidential term counter for President Vladimir Putin to zero and allow him to remain in office until 2036. Allegations of vote rigging emerged even before the voting began. As bne IntelliNews reported, famous Russian statistician Sergey Shpilkin claims that there are already signs of vote rigging in the data on registered voters.

The referendum was to confirm an unprecedented constitutional reform launched by Putin in January 2020 that revamps governance structures ahead of the retirement from his final non-consecutive presidential terms in 2024.

The coverage of the reform has mostly focused on the possible means of Putin retaining power after the 2024 presidential term expiry. The reform was seen as preparing ground for Putin stepping down or moving to another governance position (such as a union state between Russia and Belarus).

However, in an unexpected but clearly orchestrated move, in March the ruling United Russia Party  put forward a constitutional amendment that would remove the limitation on the number of consecutive terms for Russian presidents, allowing Putin to run for office again in 2024 and be re-elected for another two terms until 2036. The amendments were also cleared by the Constitutional Court.

The voter turnout of over 65% and support of 75% is notably higher than previously predicted by polls. Observers surveyed by Vedomosti daily on July 2 noted that high turnout is likely to be compared by the Kremlin to the referendum of 1993 (turnout of less than 55%) as the proof of unity around new values and progress of Putin's Russia.

As commented by bne IntelliNews, besides the re-election clause for the current president, the amendments seek to anchor Russia's conservative political discourse in social security, traditional family values, religion and the rejection of a revisionist approach to "historical truths".

The main changes to the constitution include:

Putin zeroing 2036: the most controversial change is the zeroing of Russian President Vladimir Putin’s term count that should end in 2024, thus clearing the way for him to serve another two terms until 2036. The clause “resetting” Putin’s presidential terms to zero appeared at the last minute during the Duma’s debate on the changes and was railroaded through before the public could react. It was also introduced by lawmaker Valentina Tereshkova, the first woman in space, widely seen as a national treasure.

National law: The amendments prioritise the Russian Constitution over international treaties and other acts allowing the Kremlin to ignore rulings by courts in Strasbourg or The Hague if it chooses. Russia remains the runaway leader in the number of cases brought in the European Court of Human Rights, which has awarded millions of euros in fines against Russia.

Heterosexual marriage: new language in the constitution defines marriage as a union between a man and a woman. This was one of the most widely discussed constitutional changes among the Russian public, which remains a conservative society anchored in an Orthodox view of the world.

Faith in God: The amendments also enshrine the mention of “faith in God” in the Constitution. While most Russians identify as Orthodox Christians, the country is officially secular and is home to Muslims, Buddhists and people of other faiths.

Economic reforms: The package of amendments includes economic guarantees, such as pledges to adjust pensions to inflation and a guaranteed minimum wage.

Territorial integrity: The constitution bans giving away Russian territory to other countries, making it impossible to ever return the Crimea to Ukraine.