Turkish President Recep Tayyip Erdogan visited Moscow on September 23 for what promised to be tricky talks about the build-up Russia’s military presence in Syria and emerging delays in the Turkish Stream natural gas pipeline.

Together with Palestinian leader Mahmoud Abbas, Erdogan also attended the reopening ceremony at Moscow’s Cathedral Mosque, which after a decade of reconstruction is Europe’s largest mosque with a capacity for 10,000 worshippers.

Russian support for the Assad regime would hamper efforts to find a solution to the four-year conflict, Prime MInister Ahmet Davutoglu said on September 21. “They have taken [their support for Assad] into the field. This is very dangerous. Therefore, we watch with deep concern.”

Russia has been flying heavy equipment and hundreds of personnel to Syria in recent weeks, ostensibly as advisers on purchases of its military equipment by Damascus. However, Western intelligence reports suggest that Moscow is preparing bases for possible deployment of combat forces.

Erdogan has been keen for a regime change in Damascus and has been arguing for setting up buffer zones inside Syria to provide cover for anti-Assad forces and to stop refugee inflows to Turkey. Meanwhile, Ankara and Washington earlier this year signed an agreement to train and equip moderate Syrian opposition fighters. In July, Turkey also allowed the US to use its bases to launch airstrikes against Islamic State (IS) targets in Syria.

Another key agenda item of the Moscow talks was energy cooperation, with a focus on the planned Turkish Stream natural gas pipeline project running from Russia under the Black Sea. With an estimated price tag of €11.4bn, the four-strand pipeline is due to carry a total of 63bn cubic metres of gas per year (cm/y) to Turkey and to southern Europe via Greece by 2020. However, after weeks of media reports of delays, Gazprom only just confirmed that there are hold-ups.

Gazprom CEO Alexander Medvedev on September 14 attributed this to political uncertainties in Turkey that emerged after June’s inconclusive elections, in which Erdogan’s Justice and Development Party (AKP) lost its parliamentary majority for the first time since coming to power in 2002.

Turkish Energy Minister Taner Yildiz said on August 19 that he had sent a draft-agreement to the Russian government on Turkish Stream. He rejected claims that the project had been delayed by his country's government, which imports about 90% of its energy needs. Russia is Turkey's largest supplier of natural gas.

Russian Energy Minister Alexander Novak said earlier in the month that he did not expect an intergovernmental deal on the pipeline to be signed before the formation of a new Turkish government. However, recent surveys have suggested that Turkey’s snap elections in November would produce a yet another hung parliament.

Turkey is also seeking a price discount for the gas it buys from Russia, but the sides have failed to reach an agreement on this. Russia considers the signature to start the first phase of the Turkish Stream project as a precondition for the price discount.

In other bilateral energy cooperation, Russia’s nuclear concern Rosatom is building Turkey's first nuclear power plant in the town of Akkuyu at an estimated cost of $22bn.

IS "clear perversion of Islam"

As well as the Syrian refugee crisis, the danger of extremism and terrorism, and especially the rapid advance of IS forces in the Middle East, were expected to feature in the leaders’ talks. Speaking at the morning ceremony at the mosque, Putin stressed that the non-acceptance and condemnation of any manifestations of fundamentalism and radicalism "has become a significant contribution in the fight against nationalism and religious extremism". 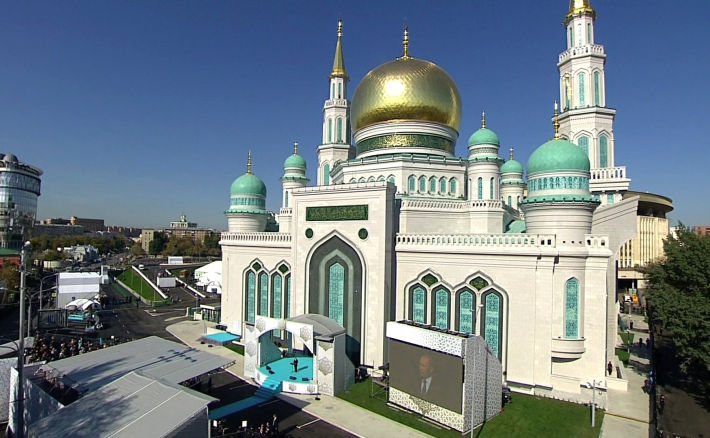 The IS ideology was notably “based on lies and clear perversion of Islam", Putin said, adding that the extremist movement originated in Syria was also actively trying to recruiting followers and fighters in Russia, which counts some 20mn Muslims among its population of 146mn people. Russian authorities say around 2,500 of the country’s citizens are fighting alongside IS.

Bilateral trade was another topic. Russia is Turkey’s second largest trading partner after Germany, and the sides expressed hopes of pushing total annual trade to $100bn from $31.2bn in 2014, despite differences over some political issues.

"Over the recent decade, relations between Russia and Turkey have reached a very good level," Erdogan said at his talks with Putin in the Kremlin. "In spite of the downgrade effect of some international factors on bilateral trade turnover, the two countries have certain prospects for growth in mutual trade ... Our goal is to reach the level of $100bn. The goal is expected to be achieved before 2023," the Turkish leader noted.

"Our trade and economic ties keep diversifying, which is gratifying," Putin said, adding that investment was growing and currently amounted to $10bn a year by each side.

Turkey is also a favourite destination for Russian tourists. Last year, 4.5mn Russians visited Turkey, representing a 12% share in the total foreign tourist visits. However, the number of Russian visitors declined by 21.6% y/y in the first seven months of 2015 due mainly to heightened security risks in Turkey.