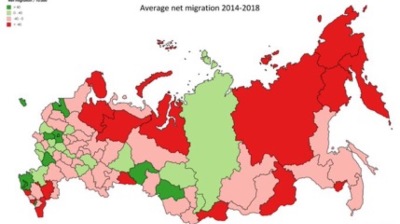 The Russian population is leaving the mono-cities of the interior and moving west in search of a better quality of life
By bne IntelliNews May 18, 2020

Three decades after the fall of the Soviet Union Russia’s population starting to undo the legacy of central planning and moving west.

During Soviet times as part of Stalin and his successors central planning million-strong cities were built in the wastes of Siberia and beyond to tap the vast mineral resources that lay under the permafrost of the tundra. Stalin kicked the process off, populating these regions using the Gulag Archipelago to provide the labour, but many inmates stayed on after the camp system was dismantled in 50s to work in the mines and factories that had been set up.

During the Soviet era these facilities were maintained as the Politburo saw the source of Russia’s wealth and power as linked to its ability to tap the vast natural resources of the hinterland to the east of the Ural mountains that define the furthest border of Europe. the collapse of the Soviet Union didn't change the thinking and the government under Russian President Vladimir Putin has maintained those factories even if they are owned and run by oligarchs now.

However, the cost of keeping these cities running is high as few are connected to the “mainland,” as the local residents refer to the rest of Russia, by anything more than airplanes.

But with the coming of Putin’s prosperity and the easing of travel restrictions the young people born in these settlements are increasingly choosing to move west to the more hospitable European part of Russia, which is already home to some 80% of the population.

“Russia's population is becoming more Western every year, at least geographically. The three westernmost federal districts benefit from internal migration, all others lose. Fastest depopulation: Magadan, Komi, Yamalo-Nenets AO,” Dr Janis Kluge of the Stiftung Wissenschaft und Politik (SWP) in Berlin said in a tweet that also posted the map  of the change in population distribution.

The process is also being driven by the companies in these mono-cities seeking to cut staff and rid themselves of the social obligations that come with a company town such as maintaining schools, shops and hospitals. However, pensioners and those not working at the local company have largely found themselves trapped. While many pensioners living the frozen wastes of Norilsk on Russia’s far northern coast would happily move to somewhere on the border of Ukraine and live off their dacha garden as they are unable to sell their apartments they are unable to buy a dacha in the European part of the country and so can’t move.

But recent statistics show a steady flow of people from the internal regions of the hinterland making their way west to settle in the European parts of the country.

In addition to being pushed out of the remote regions, Russians are being pulled into the European regions which are increasingly competing with each other in the struggle to attract domestic investment. While incomes in a city like Kazan in the republic of Tatarstan are lower than in Moscow, so is the cost of living. As regional governments invest in social infrastructure the quality of life has drastically improved in these regional cities. Kazan, for example, reports reverse migration with former residents returning to the region, especially if they have young children as it can compete in quality of lie terms with Moscow.