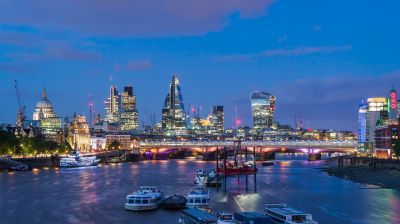 Gazprombank filed for "voluntary strike-off" from UK register in December 2015 / Photo by David Iliff
By Jason Corcoran in Moscow February 1, 2016

Gazprombank is winding up its operation in London 18 months after Russia's third-largest lender was sanctioned by the EU over the Kremlin's involvement in the Ukrainian conflict.

Filings from UK Companies House obtained by bne IntelliNews show that Gazprombank made an application to be struck off on December 18. A First Gazette notice for "voluntary strike-off" was submitted on December 29, which means Gazprombank Financial Services UK Ltd will be struck off from the register in two months and dissolved.

Gazprombank withdrew its application for a UK investment bank license in 2012 after the London regulator indicated it wouldn't grant authorisation without more information about its shareholders. Since then, the bank opted to retain an office and staff in London's square mile but punitive sanctions put paid to any future plans.

The secretive bank, which is known to be staffed by many former FSB intelligence service operatives, opened its office in London in 2006 with plans to pave the way for the group's initial public offering. Germany's Dresdner Bank had been due to buy one-third of Gazprombank in a $800mn deal aimed at helping the institution prepare for its IPO. But the deal collapsed after Gazprombank said Dresdner had not offered enough cash.

Dresdner in Russia was run at that time by Matthias Warnig, a former Stasi spy who knew  President Vladimir Putin when he was a KGB officer in Dresden during the Cold War.

Gazprombank has been run for a decade by Andrey Akimov, a close St Petersburg ally of Putin since the 1990s. Akimov, who has never given an interview on the record, likes to drive a Tesla Model S sports car around Vienna, according to a Bloomberg News report.

The bank, along with VTB, Sberbank and VEB, was sanctioned by the EU and the US in July 2014 after the crash of a Malaysian passenger plane in rebel-held eastern Ukraine implicated pro-Russian militia. The sanctions restrict Gazprombank and other lenders from organising new financing with a maturity beyond 30 days.

The bank has in the last year been focusing more on developing its overseas operations from a hub in Luxembourg. Its capital at its unit in the Grand Duchy was boosted by €50mn to €80mn, according to a December 4 statement on its website.

But Luxembourg, of course, is in the EU and Gazprombank did move money back to Moscow from the Duchy and Belgium earlier in 2014 to prevent client funds being frozen because of sanctions, according to a report by RT.

The bank has changed its registered office in London three times over the past year, moving to two locations in the West End and finally to New Bridge Street near Westminster.

Investment bankers who worked in London for Gazprombank include Russian citizens Igor Rusanov, Alexey Obozintsev, Akaki Beruchasvili, Briton Mark Humphreys and Austrian Rolf Gerza, according to the filings. Humphreys and Gerza had both been hired from Dresdner prior to the mooted IPO.

Gazprombank, started in 1990 as an institution focused on OAO Gazprom, the Russian natural gas export monopoly, has grown to serve more than 45,000 companies. Gazprom retains a 36% stake in the lender, which does relatively little retail banking.

Its latest published earnings released in December, shows the lender slumped to loss of RUB31.1bn in the first nine months of last year compared to a net profit of RUB9.2bn in 2014.

The bank said a "substantial growth of impairment charges" was the main driver behind the loss as it more than doubled its provision for bad loans.

Due to the sanctions, Gazprombank cannot refinance on international markets and is relying on its significant RUB2.4 trillion deposit base for funding. The bank paid down two Eurobonds last year worth CHF500mn and $948m but still has another $3bn maturing in the next couple of years.

"There wasn't much point in Gazprombank retaining real estate and their team in London," a senior Russia-focused banker told bne IntelliNews. "If the sanctions aren't lifted this year, I can't see much point in Sberbank or VTB hanging around either."

Both VTB, which at one point had over 500 staff in London, and Sberbank, have slashed their headcount in their London and relocated personnel to Moscow and to work on other markets in Asia.

Alfa Bank, which hasn't been sanctioned, has reduced its presence to a skeleton staff while Aton Capital has exited entirely.