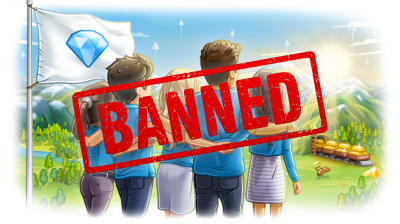 Internet guru and owner of the Telegram message service Pavel Durov raised $1.7bn for his TON blockchain project but has cancelled it after it was banned by US courts / Telegram
By Ben Aris in Berlin May 13, 2020

Internet guru and owner of the Telegram message service Pavel Durov has halted his TON block chain project and may have to return the $1.7bn he raised in the largest ever ICO to fund the project.

“Today is a sad day for us here at Telegram. We are announcing the discontinuation of our blockchain project. Below is a summary of what it was and why we had to abandon it,” Durov announced on his Telegram channel.

The much-hyped project was to create a state-of-the-art blockchain with the associated Gram coin that was to become a platform for commercialising blockchain. Despite all the hype surrounding blockchain there has yet to be a single widely used commercial application of the technology, partly due to the difficulties related to the lack of a widely used and accessible platform.

“For the last two and a half years some of our best engineers have been working on a next-generation blockchain platform called TON and a cryptocurrency we were going to name Gram. TON was designed to share the principles of decentralisation pioneered by Bitcoin and Ethereum, but to be vastly superior to them in speed and scalability,” Durov said in a statement following the announcement. 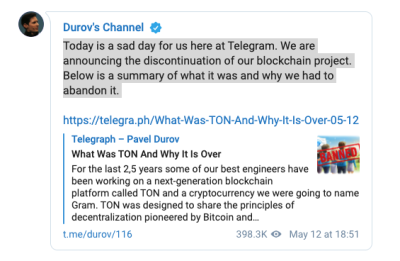 As bne IntelliNews reported last week, the TON project was already in trouble after it missed yet another deadline to launch the blockchain.

Telegram raised $1.7bn from 171 investment funds and wealthy individuals with an ICO in early 2018, including 39 US investors. Under the initial plan, TON was scheduled for release in the second quarter of 2018, but was then delayed to 2019. But the project had a further setback when the US Securities and Exchange Commission (SEC) launched a lawsuit against Telegram in October 2019, after which Durov set a new deadline of April this year. That too was missed.

Hostile to the launch of the Gram cryptocurrency, the US regulator sees in the 2018 ICO an unregistered securities sale. In March 2020, a US judge ruled that Telegram cannot launch its blockchain or issue the Gram tokens until the case has been resolved.

Durov blamed the US court decision for halting the project. His statement was accompanied with a graphic bearing the word “banned” in red letters. He wrote scathingly of the US court decision: “Unfortunately, a US court stopped TON from happening. How? Imagine that several people put their money together to build a gold mine – and to later split the gold that comes out of it. Then a judge comes and tells the mine builders: "Many people invested in the gold mine because they were looking for profits. And they didn't want that gold for themselves, they wanted to sell it to other people. Because of this, you are not allowed to give them the gold." If this doesn't make sense to you, you are not alone – but this is exactly what happened with TON (the mine), its investors and Grams (the gold). A judge used this reasoning to rule that people should not be allowed to buy or sell Grams like they can buy or sell Bitcoins.”

Durov had promised to return most of the $1.7bn to investors if he missed the deadlines, and until recently the investors were happy to wait. In the latest delay Durov offered to return 72% of investment to anyone that wanted to pull out now or 110% of the original investment if they would wait until the new planned launch date on April 30, 2021. Most investors said they were willing to wait. Durov is covering the part of the money already spent with his shares in Telegram, which is not listed but estimated to be worth north of a billion dollars.

The new delay was announced last week and Telegram wrote to the TON investors, saying they could ultimately receive “Grams or potentially another cryptocurrency on the same terms as those in their original purchase agreements.” However, the company said further progress depends on how the talks with the relevant authorities go. It appears those talks have gone sour.

The US court's decision to ban TON was global, as the judge said that US citizens might go overseas to use it. That opens the possibility of US sanctions on international investors if TON was launched in another jurisdiction like Europe and in effect puts a global ban of the launch of the blockchain.

“And yet despite that, we have made the difficult decision not to proceed with TON,” Durov said in the statement. “Sadly, the US judge is right about one thing: we, the people outside the US, can vote for our presidents and elect our parliaments, but we are still dependent on the United States when it comes to finance and technology (luckily not coffee). The US can use its control over the dollar and the global financial system to shut down any bank or bank account in the world. It can use its control over Apple and Google to remove apps from the App Store and Google Play. So yes, it is true that other countries do not have full sovereignty over what to allow on their territory. Unfortunately, we – the 96% of the world’s population living elsewhere – are dependent on decision-makers elected by the 4% living in the US.”

Durov did not mention if or how he would return the $1.7bn invested in the ICO in the statement.

Croatian president says Western sanctions aren’t working
10 hours ago
Kosovo’s PM Kurti says risk of new conflict with Serbia is high
11 hours ago
End of Vienna talks means US, Iran political approvals now needed to revive nuclear deal
19 hours ago
Western capitals wonder what kind of sanctions deal Erdogan may have cooked up with Putin
1 day ago
Leaders of Serbia and Kosovo to meet as they pull back from brink of conflict
2 days ago