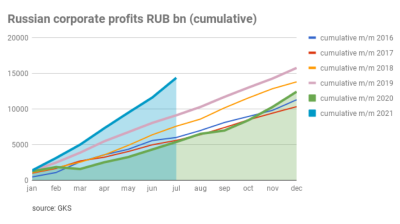 Russian corporates earned $38.6bn in July, more than double the results for July in 2020 and 2019. On a cumulative basis earnings were three times as much as in 2020 and a third as much as in 2019, the last year of strong economic growth. / wiki
By bne IntelliNews October 1, 2021

The profits of Russian corporate profits soared in July, the last month of available data, rising to RUB2,767bn ($38.6bn), more than twice as much as the RUB1,061bn that companies earned in the same month a year earlier, but also more than twice as much as the RUB1,070bn they earned in July 2019, the last year of strong growth. This July’s result was by far the best result of any month this year as well as the best monthly result in the last five years, putting Russian companies on course for a banner year.

While the economic bounce-back has been in positive territory since March of this year for the economy as a whole, the growth figures remain lacklustre. However, at a microeconomic level companies are earning extremely good profits.

The government is well aware of their good fortune and has moved to impose a series of tax hikes and changes to tap into this windfall, but so far has not pulled the trigger on any of these changes. The metallurgical sector has been singled out in particular and the government is talking about increasing the mineral extraction tax (MET) as metallurgical companies have been benefiting from a boom in commodity prices.

As the chart shows, corporate profits are now well ahead of any year since 2016 and show no sign of slowing down.