Russia sets up a nationwide rubbish management and recycling company 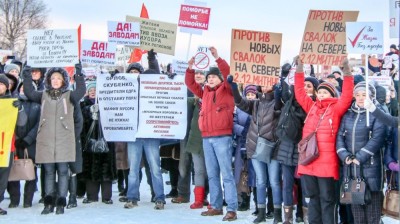 Russian President Vladimir Putin has signed a decree to create an all-Russia recycling company, Vedomosti reported on January 14. The new company is designed to deal with municipal solid waste, to manage the recycling system, to stimulate investment and to implement one of the 12 national projects, “Ecology”, that will be overseen by the Ministry of Natural Resources and Environment, according to Putin’s decree.

Dealing effectively with garbage became a political issue in 2018 after 25,000 people took part in a protest in December in Shies near the northern city of Arkhangelsk over the poor state of a landfill that hosts Moscow’s rubbish – one of the biggest protests since the fall of the Soviet Union. Other cities have seen smaller protests over similar issues.

While purely political protests lead by anti-corruption blogger and opposition activist Alexei Navalny typically see only a few hundred, or at best a few thousand, protestors turn out, civic issues like smelly landfills have the power to move large numbers of people, which the Kremlin take much more seriously.

According to the decree, by January 1, 2020, the government has been instructed to “ensure the creation and operation of a unified state system for the accounting of solid municipal waste”, which includes setting up organised solid waste disposal in all 83 regions of Russia and an electronic supervision system to coordinate and monitor the work.

Regional systems for accounting for municipal solid waste have been created “on the basis of the weight control information that comes in automatically from the objects of disposal and disposal of these wastes, as well as information on their movement”.

The regional operators for waste management should receive more than RUB75bn ($1.1bn) from the budget to pay for the system.

The creation of a national waste management operator is part of a larger reform that came into effect at the start of this year that is designed to reduce the burden on the environment and lead to the emergence of a new market for waste management. A fee for the removal of waste has also been introduced, which waste management contractors will receive directly and that will depend on the tariffs set by the state.

However, the Ministry of Environment has ruled that starting in 2019, the payment for rubbish collection fees will increase by no more than 5%, and in subsequent years the growth of the tariff will be capped at the level of inflation, which is currently under 4.2%.

By 2024, the state would like to achieve the disposal of 36% of municipal solid waste versus the current 4%. According to the Ministry of Industry and Trade, Russia needs about 130 waste treatment plants.