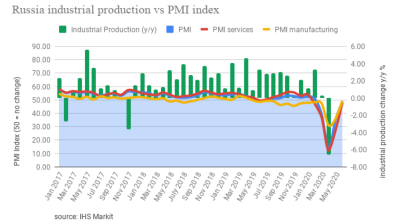 The downturn in business activity was only modest overall, and eased to the slowest in the current four-month sequence of contraction. Lower output was commonly linked to historically weak client demand following the coronavirus (COVID-19) disease outbreak. That said, the softer decrease was partly attributed to the reopening of service providers and interest from new and existing customers.

The recovery of the service PMI follows on from the bounce back in the Russia Manufacturing PMI in June, which recovered almost all the ground it has lost during the coronacrisis to post 49.4 at the end of the second quarter, just below the 50 no-change mark, IHS Markit said in a press release on July 1. The June result is up from the deep contraction in manufacturing of 36.2 in May.

Taken together, the IHS Markit Composite PMI Output Index posted 48.9 at the end of the second quarter, up from 35.0 in May, and also not far from the 50 no-change mark.

The result was the slowest decline in activity since February. The pace of the decrease in overall output eased amid a slower downturn in service sector business activity and a modest rise in manufacturing production.

Services have been harder hit than manufacturing but the bounce back is also likely to be more rapid. The June service PMI data indicated a further, albeit substantially slower, decline in business activity across the Russian service sector, according to Markit.

The fall in services output was only modest overall as firms cleared backlogs of work, and amid some reports of demand picking up. That said, the rate of contraction in new business remained sharp overall as firms reported historically muted client demand.

Meanwhile, weak new order inflows resulted in further redundancies, with employment falling at a strong pace. Nonetheless, the gradual reopening of the economy and signs of renewed client interest drove business confidence to a four-month high.

Input prices rose at a slightly faster pace in June as suppliers hiked costs. Efforts to attract customers led to a continued reduction in output charges, however, albeit only fractional overall.

Manufacturers and service providers alike recorded renewed optimism in June, amid hopes of an upturn in client demand following the wider reopening of the economy. Although reaching a four-month high, the degree of confidence was well below the series trend as the pandemic continued to weigh on expectations.