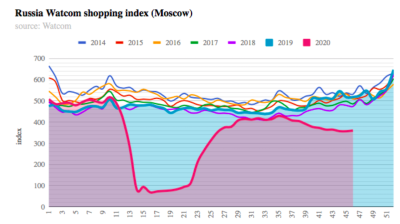 The Watcom shopping index continued to slide in November, but the fall is slower than feared. Still, foot traffic in Moscow's leading malls is down by a quarter y/y.
By Ben Aris in Berlin November 19, 2020

Russia’s Watcom shopping index continued to slide in the first weeks of November and is now lower than at any time since the survey was launched in 2014, but the fall is slowing. However, the fall was less than feared and the levels of foot traffic appear to be stabilising now, down by a quarter from a year earlier.

The index measures foot traffic in Moscow’s leading malls in real time using 3D imaging technology and is one of the most immediate indicators of the changing moods of the Russian consumer.

The index crashed to never-seen-before levels in the summer as the Russian capital was locked down for several months to combat the spread of the coronavirus (COVID-19) epidemic, but recovered quickly at the end of the summer after the restrictions were lifted, and returned to levels on a par with previous years.

However, the index started falling against in September as the second wave of the pandemic gathered momentum and has been decreasing from the 475-485 range seen in the last two years in the 46th week of the year (start of November) to 360 this year.

Analysts worried that the index would decline further and faster as Russia is suffering from over 20,000 new cases a day – twice the infection rate in the first wave in May – and the healthcare system is already under enormous pressure.

The government has made it clear that it will not impose another lockdown, as it has made the tough call to prioritise limiting the economic damage (which as the 1990s showed also impacts health) over allowing infections to spread and the danger that brings to public health.

Nevertheless, a “lockdown-lite” has been imposed. All residents over the age of 60 years have been ordered to stay at home and mandatory mask and glove rules for public places are being rigorously enforced.

At the same time, the Watcom index shows that Muscovites are choosing to avoid public places, including malls where the foot traffic was down by 24.9% in week 46 year on year.

The fall in foot traffic at Moscow’s high-end malls is much steeper than the countrywide fall in retail traffic and has been doubly hurt by the rapidly expanding e-commerce business, including e-groceries.

“RosStat data for September related to consumer demand (retail sales and wages) was weaker than expected. Both retail sales for September (­3.0% y/y) and real wages for August (+0.1% y/y) not only fell short of the Bloomberg consensus estimates (­2.1% y/y and +1.4% y/y respectively), but were below the lower bound of the respective confidence intervals made of standard deviations around the consensus' mean estimates,” BCS Global Markets said in a note earlier this month.

Indeed, as bne IntelliNews reported, e-commerce is booming in Russia and the leading retailers have barely been affected by the coronacrisis.

Romania’s inflation up in April on higher fuel and electricity prices
2 days ago
Romania’s net wage hits record €726 in March
2 days ago
Slovenia reports hike in demand for new workers in manufacturing and retail sectors
3 days ago
Inflation in Belarus at 4.6% in April
3 days ago
Polish gross wages pick up growth to 6.6% y/y in Q1
3 days ago