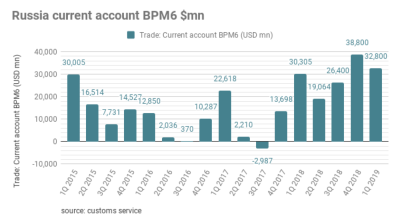 In 1Q19, Russia’s current account surplus totalled $32.8bn, up from $30bn seen in 1Q18, according to the preliminary estimate of the balance of payments published by the CBR on April 9.

However, the bulk of the surplus lies in the dynamic of imports, which fell more sharply than exports (-2.6% y/y in 1Q19).

Net capital outflow in 1Q19 was up 1.6 times y/y and reached $25.2bn ($16.1bn in 1Q18). Banks contributed to the larger part of this outflow ($15.7bn). The outflow was driven by a rise in purchases of foreign assets according to the CBR; it also appears that a spike in outflows reflected tight lending conditions for Russian borrowers on external bourses that forced banks and companies to repay their foreign debt rather than to refinance it.

"The data points to a two-speed economy in Russia," opined BCS Global Markets in a note. "These BoP statistics are yet another indicator of the existing and widening gap between various segments of the Russian economy. On one hand, exporters and recipients of public funding, such as the defence industry, are demonstrating solid growth rates. On the other hand, the majority of pure domestic businesses continue to suffer from weak and stagnating demand – falling volumes of imports show just that."

While a rise in overall current account numbers is usually seen as a sign of strength in an economy, in Russia’s case it actually reflects quite the opposite – an existing economic weakness, especially on the domestic front, which is manifest in the falling import numbers.

"The figures for 1Q19 were largely in line with our estimates," Sberbank CIB commented on April 11. The bank still expect a full-year current account surplus of around $100bn assuming Brent averages $70/bbl.

In such case, Sberbank estimates total capital outflow reaching $27bn in 2019, with gross international reserves (GIR) adding $73 bln. Such scenario is contingent on the geopolitical situation remaining relatively calm for the rest of the year.

"Should that not prove to be the case, the net capital outflow would likely increase, pressuring the ruble and widening the current account surplus," Sberbank CIB warns.