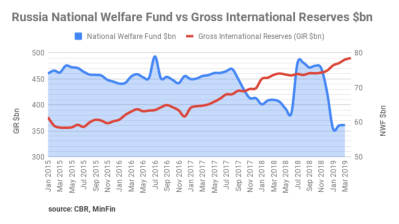 Russia’s gross international reserves (GIR) reached $490.9bn as of April 19, according to the Central Bank of Russia (CBR), the highest level in since March 2014.

The CBR has been able to build up reserves thanks to the record high current account surplus that topped $115bn in 2018. The rise of oil prices, which broke through the important $70 mark in the last few weeks, has helped, but depressed imports due to the stagnation of real incomes has also contributed to the strong surplus.

All in all Russia is running a triple surplus again, of federal budget, trade and current account.

The CBR has been flip flopping on the need to pursue its informal target of building reserves up to $500bn, but it has almost achieved this target without really trying.

This article is from bne IntelliNews Russia monthly country report. Sign up to receive the report to your inbox each month, covering the slow moving macro- and micro-economic trends, the major political news and a roundup of the main sectors and corporate news. The first month is free and you can unsubscribe at any time.