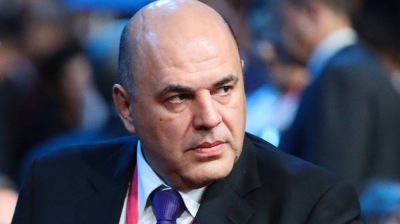 Russian PM Mikhail Mishustin's recommendations for a slew of government changes have been agreed by President Putin.
By bne IntelliNews November 10, 2020

Russian President Vladimir Putin on November 9 has accepted the government changes that were put forward by Prime Minister Mikhail Mishustin under the new simplified procedure that was one of the amendments voted in during the Constitutional referendum earlier this year.

As reported by bne IntelliNews, in the beginning of 2020 the government of trusted technocrat PM Mishustin has swiftly replaced that of long-time Putin's proxy Dmitry Medvedev. Mishustin was seen as mandated to implement Putin's National Projects spending spree.

However, the launch of the National Projects was upset by the coronavirus (COVID-19) pandemic turbulence and was partially rolled back. The new changes in the government could indicate it is regrouping after the shock and is adapting to the new post-US election external environment.

"Essentially an econ management/National Projects focus with a bit of Mishustin muscle-flexing," Marc Galeotti of Mayak Intelligence commented on November 9 on the latest government reshuffle.

The most notable change in the government is the promotion of the Minister of Energy, Alexander Novak, to the post of the Deputy Prime Minister, covered in detail separately by bne IntelliNews. Novak will be replaced by the ex-head of RusHydro hydropower utility major, Nikolay Shulginov.

“Shulginov is interesting as there were rumours of his being fired from RusHydro. This looks like a compromise candidate - lots of big businesses want their own person as Energy Minister to get point position on construction contracts - he's a neutral, competent manager,” said Tom Adshead, a political analyst with Macro Advisory.

Notably, Putin has signed a separate decree increasing the number of Deputy PMs from nine to ten to allow Novak his promotion. This highlights the pivotal role of the energy sector in Russia's economic policy and the balancing of the oil output and prices under the international OPEC+ deal which Novak co-authored.

“Another twist is that the President increased the number of deputy PMs to 10, so there is room for 3 more, so we may see some promotions today. These are the first ministers appointed under the new law, so they will have to be ratified by the Duma, but this should be no problem,” said Adshead. “I see this as a win for Mishustin - he did not get all the people he wanted when he was first appointed PM, but now is moving to stamp his authority, within the bounds of the political forces that constrain all activity in Russia.”

Sources and analysts surveyed by Vedomosti believe that Novak's promotion coupled with the changes in the Ministry of Natural Resources is a response to "green" challenges that Russia's energy sector will have to face at the international arena vis-a-vis the European Union and the US president-elect Joe Biden.

Ex-Minister of Natural Resources Kobylkin has also been under fire for the implementation of the waste management reform and the Ecology National Project, RBC business portal reminds on November 9.

The fired Yakushev and Kobylkin have previously served in the regions that are believed to be in the sphere of political influence of the Moscow Mayor Sergei Sobyanin.

“There may be suggestions that Sobyanin loses out, as one of his guys (Kobylkin) moves from a ministry to a regional representative job, probably one to which he is better suited,” said Adshead.

Still, Sobyanin is seen as largely in control of the construction policy, as both Deputy PM Marat Khusnullin, responsible for construction, housing, and transportation, as well as the newly appointed Minister of Construction Fayzullin are seen as affiliated with the Moscow mayor.

As for transportation, the CEO of Aeroflot Savelyev was seen as the only manager in the transportation sector that has adequately reacted to the COVID-19 crisis, sources told RBC, seeing his appointment as the Minister of Transportation as logical. Aeroflot was also working closely with the Federal Tax Service (FNS), which PM Mishustin used to head.

The reshuffle is also seen as a pilot run of new constitutional amendments by PM Mishustin, as the State Duma is expected to vote it in smoothly. The timing of the changes in the government is seen as prudent, as the latest three-year budget has just been voted in.