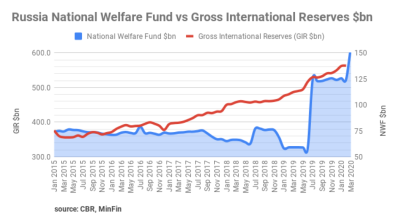 The amount of money in the NWF reserve fund has risen twice this year from $127bn to $150bn and now again to $157.2bn thanks to a series of transfers by the Russian Ministry of Finance
By bne IntelliNews March 27, 2020

The Russian Ministry of Finance announced on March 19 that it has transferred last year's budget surplus to the National Welfare Fund (NWF), which now amounts to about RUB12,200bn ($157.2bn), or 11% of GDP, reported Bank of Finland Institute for Economies in Transition (BOFIT) in its weekly update.

The reserve fund can be used to cover a budget deficit in times of crisis, and held some RUB8tn ($123bn) at the start of March, or 7% of GDP.

Finance Minister Anton Siluanov said earlier this month that the current crisis would blow a RUB3tn hole in the budget that will be covered by withdrawals from the NWF. If nothing changes and Russia continues to run RUB3tn budget deficits because of persistent low oil prices then there is enough in the fund to last four years – and that is without cutting spending from the planned budget due to run to 2022 or raising taxes. Siluanov said earlier that the amount of money in reserves was enough to endure a decade of low oil prices.

The reason for the sudden jumps in the NWF recently is due to an accounting quirk. The fund is administered by the CBR which reports on its size; however, the Ministry of Finance is the one that collects the taxes and oil duties that feed the fund, which it holds in special accounts before formally transferring this cash to the fund periodically. Normally that money comes from surplus revenues earned from oil exports when the prices are over $42 per barrel, but this latest uptick was due to Ministry of Finance transferring the budget surplus left over from 2019 to the NWF war chest. (This so-called budget rule has been suspended until April, allowing the Ministry of Finance to spend surplus oil revenues rather than send them to the NWF.)

In the meantime, the CBR has continued to build up the gross international reserves (GIR). As of Friday, March 13, Russia's foreign exchange reserves (including gold) reached $581bn, their highest level since August 2008.   However, in the last week the CBR has begun to sell currency from its reserve to prevent rapid fluctuations in the foreign exchange market. But what selling is happening has been relatively small, of the order of $75mn a day, as the CBR remains prudent and would rather let the ruble’s value fall than burn through its reserves in an effort to maintain the currency’s value.

December figures may point to the high inflation beginning to subdue consumption or to households holding back spending after increased spending in November.

The expansion shot up well above the consensus line of 13% y/y.

The PPI climbed to the highest point since the late 1990s.

Trade gap widened by 24% y/y to $5.83bn – which represents nearly one third of the estimated GDP last year.

Growth of output prices in Slovenia accelerates to 10.6% y/y in December

The producer price index (PPI) started to increase rapidly at the beginning of 2021.