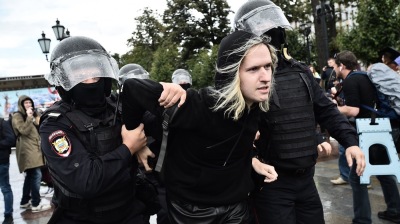 The independent pollster Levada Center found 30% of Muscovites are against the protests in the capital, versus the state-owned VTsIOM which found 70% condemn them / twitter
By Ben Aris in Berlin August 7, 2019

The results of a poll by independent pollster the Levada Center violently disagreed with a poll by the state-owned pollster, the Russian Public Opinion Research Centre (VTsIOM), on the reaction to the weekend protests over the upcoming city council elections.

Levada found that 37% of Muscovite supported the protests, 27% viewed them negatively and 30% were neutral.

Those results differ substantially from a VTsIOM poll released on August 2, the day before the latest weekend protest in Moscow that found 70% of Russians said the authorities should quell the protests.

The difference could be explained by the nationwide reach of the VTsIOM poll, as Moscow is significantly more westernised and politicised than the rest of the country, but VTsIOM also reported much higher negative sentiment amongst Muscovites than Levada as well.

"As many a 61% of Muscovites and 69% of Russians in general agree with the authorities’ tough actions during the unauthorised rally," VTsIOM said in a statement.

The Levada Center survey was conducted from July 26 to July 31 among 1,500 Muscovites. “The survey was conducted after a large authorised meeting [July 20], so it was important to understand how these three big factors relate to each other. Survey results show that protests are a self-sufficient thing,” Konstantin Kostin of Levada said, as cited by Vedomosti.

The VTsIOM poll was conducted at the same time on July 29, with 1,600 people aged 18 and above interviewed over the phone. The margin of error does not exceed 2.5%, with a certainty of 95%.

Both surveys were conducted after two significant rallies. The July 20 sanctioned rally saw some 20,000 people demonstrate – the biggest rally since the protest against the fixed Duma elections in 2011 that had 100,000 people on the street – and was peaceful. The July 27 unsanctioned rally had some 10,000 participants, according to NGOs, who violently clashed with the police.

The difference between the two surveys is well beyond the margin of error. VTsIOM estimates its margin of error of not more than 2.5% and 95% certainty.

Usually the Levada and VTsIOM polls produce similar numbers. During the presidential elections some commentators questioned the veracity of VTsIOM’s results, but a bne IntelliNews investigation found that on the whole the differences in numbers from the two pollsters were within the margin of error.

The gap in this poll suggests that the state has interfered with VTsIOM’s poll result as part of a sustained campaign to de-escalate tensions.

However, rather than outright fixing the numbers, the difference in the results is probably largely due to the different way the question in the polls was framed.

Levada simply asked if people were aware of the protests and then asked:  “How do you feel about the protests?” which is a much more neutral question than VTsIOM, which asked “Do you agree or disagree that powers that be should act to uphold the law?”

Previous studies have shown that the results of polls in Russia are skewed by some 5% because of Russian’s disquiet about saying negative things about the state to officials, including pollsters. However, in this case VTsIOM’s question is even more extreme, as it specifically asks respondents if they support breaking the law – something few Russians will concede in a conversation with an official. In other words, the poll is subtly designed to give a result that supports the government’s point of view.

In a parallel story the Moscow City government organised a Shashlik (kebab) festival on the same day as the last weekend rally on August 3 and subsequently reported that attendance was over 300,000 people – a claim that has been widely ridiculed on social media by those that attended.

The current bout of protests has clearly unnerved the authorities. The level of police brutality is new and the officers have clearly been given orders to randomly arrest members of the public, as evidenced by multiple reports of innocent by-standers being detained by police. Moreover, the protests have been entirely peaceful and offered the police no provocation nor involved any destruction of property of any kind.

Opposition leaders are organising yet another rally for August 10 in Moscow. Anti-corruption blogger and opposition activist Alexei Navalny has also called for nationwide protests on the same day in the regional capitals, and is refusing to apply for permission. That could lead to more police brutality but across the whole of Russia, as the opposition has in effect thrown down the gauntlet in front of the Kremlin. However, it remains to be seen if regular Russians in the regions are willing to come out on the street and face the police batons. The crowd at Moscow’s August 3 rally was much smaller than previous rallies – an estimated 1,500 to 5,000 according to various sources – which represents a hard core of politicised protesters. It seems that the brutal beatings dished out to protestors on July 27 dissuaded many regular Russians from attending the August 3 rally. And Russians in the regions are much less interested in politics than those in the capital.