The Russian government has moved from a war budget to an election budget
By Ben Aris in Berlin August 25, 2017

The Russian government has moved from a war budget to an election budget as social spending soars and defence spending is cut.

With the presidential election now only a year away, which Russian President Vladimir Putin, virtually unopposed, is expected to easily win, the Russian government has changed its budgetary focus and boosted social spending to soften up the electorate.

Budget spending increased by over 6% year on year (y/y) in the first six months, which meant real growth was rather moderate. Russian GDP adjusted for seasonal and calendar factors rose 2% y/y and declined 0.6% month on the month in July, state development bank Vnesheconombank (VEB) said in a research note on August 24.

Social spending, however, increased by about 10%, even when omitting the one-time payout to pensioners at the start of the year. Budget spending in the housing sector as well as in different sectors of the economy turned to notable growth after some years of decline. Even with a slightly less severe restraint, the spending track on education remained weak, while spending on healthcare declined. The zero-growth line on administration spending seen last year remained in place, outlines the Bank of Finland Institute for Economies in Transition (Bofit).

And the increase in social payment comes not a moment too soon. While the economy has been starting to show visible signs of growth, this has yet to trickle down to the man in the street. Real incomes have started to rise, but the more important real disposable incomes (the extra money Russians have to spend on themselves) only turned positive in June – and even then its growth remains anaemic.

At the same time anti-corruption blogger and opposition leader Alexei Navalny was stirring up the hoi polloi with a set of nationwide protests – the first significant protests in the regions – earlier this summer.

While the latest poll from the independent pollster Levada Center shows that Putin’s personal popularity is up 2 percentage points to 83% in the latest poll, the pollster also found that the propensity to protest with political demands has spiked over the same period. The government is clearly hoping that a year of largesse will make the voters warm to their president.

Subsidiary to the social spending, the rising revenues have also benefited regional governments, which have been feeling the most pain in recent years as, unlike the federal government with oil and gas taxes to rely on, they have had to rely on income taxes and VAT for the bulk of their spending. The majority of Russia’s regions have been running into trouble and rely on the centre for bailouts. The government had to restructure the debts of the most financially strained regions last September, according to Deputy Prime Minister Dmitry Kozak.

However, the budgets and social funds of the regional governments have benefited the most from the recovery in budget revenues this year. The federal budget revenues rose by over 20% y/y in the first half of this year due to higher oil and gas tax earnings. Transfers to state social funds represented the fastest-growing spending category, while transfers to regional budgets also rose after two consecutive years of declines.

Regional and local budget revenue growth is accelerating in its own right thanks to rising income. Regional spending rose by over 6% y/y, while regional budget surpluses as a total were unusually large, reports Bofit. Revenues and spending of state social funds rose by about 9%.

If 2016 was the Kremlin’s annus horribilis when it was short RUB2 trillion to cover a swelling budget deficit and had very few options to raise the money, then 2017 is looking distinctly better and currently Russia is even running a small budget surplus.

Ultimately, the government muddled through 2016 – which would have been a crisis year in the previous decade – partly thanks to the dodgy “privatisation” of a 19% stake in Rosneft. (It has since been reported that the money raised was more of a loan.)

But the first green shoots of economic growth have led to an increase in tax revenue on several fronts. The rebound of revenues on the consolidated budget (federal, regional and municipal budgets plus state social funds) continued in the second quarter of this year, Bofit reports.

“For the first half of 2017, revenues were up 16% y/y in nominal rubles. Revenues from oil & gas taxes rose by 37% from the lows of 1H16, while other budget revenues increased by nearly 12% (well above Russia's 4.4% inflation rate). Even if growth in revenues from excise taxes and corporate profit taxes slowed in the spring, both revenue items in the first half of the year were nearly 20% higher than in 1H16,” Bofit said in its latest update.

“Revenue streams from social taxes and value-added taxes were strong, which form the consolidated budget's two largest revenue streams, as well as revenues from property taxes, continued to experience strong growth, rising by 11–12% in the first half of the year. Labour income taxes also generated clearly higher revenues than a year ago,” the institute continues. “Thanks to higher revenue flows, the first-half consolidated budget showed a slight surplus.”

The current budget is clearly oriented towards the people and has more than half an eye on the elections next year. At the same time, the other really notable item was an 8% cut in defence spending in the first half of this year.

Putin ramped up spending on defence in 2013 to an extent that former finance minister and co-head of the presidential council Alexei Kudrin was sacked when he protested. Putin in effect sacrificed some of Russia’s prosperity to rearm.

But that process is slowing now as the bulk of the work is done, even if the modernisation programme is not officially due for completion until 2020.

Putin has also been given some breathing space by the chaos in Washington. The anti-Russia hysteria has been white hot for most of the first half of this year, but as new issues such as a nuclear attack on North Korea, deteriorating relations with China and most recently a potential shutdown of the US government over the issue of who pays for US President Donald Trump’s Mexican wall, the attention on Russia has faded somewhat.

Going forward the Kremlin will now have to build on the start of growth by putting through long-term and deep structural reforms. But that won’t start, if at all, until after the elections are passed. 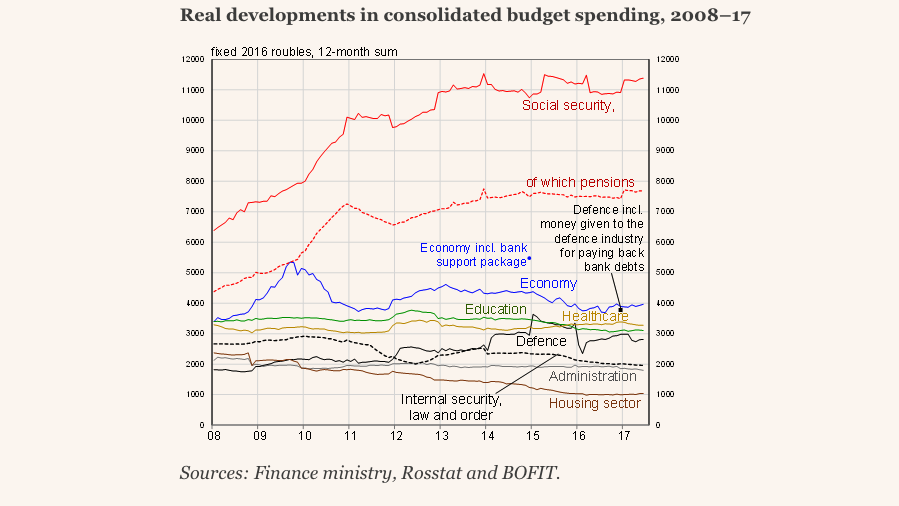 The 21-share blue-chip CROBEX index has been rising since the start of the year as Croatia's economy continues its recovery from the coronacrisis.

New records announced daily in several countries, but most governments are reluctant to introduce new restrictions.

The Russian initial public offering (IPO) market in 2021 hit a record $3.7bn, the highest since 2011, RBC business portal reported citing the data by Refinitiv. At the same time, the M&A market was down by 40% in 2021.