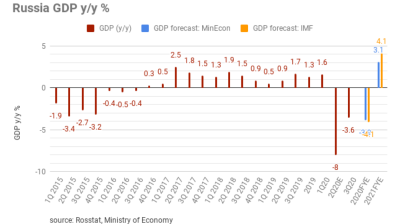 As reported by bne IntelliNews, previously the risks associated with the second wave of coronavirus (COVID-19) have called the official economic outlook of the Ministry of Economic Development into question. Better GDP dynamics in 3Q20 are thus welcome.

The data came in line with the consensus forecast but was better than the official expectations (-3.8%), BCS Global Markets commented on November 13, estimating that in 9M20 GDP fell by 3.5% y/y after -3.4% in 2H20.

"Following the release of 3Q20 growth data, GDP decline in 2020 could now be even smaller than our -3.8% y/y forecast, which is a positive," BCS GM argues. The analysts believe that this reflects the stress-resistant structure of the economy as well as a rather efficient, albeit modest in total funding terms, government response to the crisis.

While the full breakdown of GDP numbers is yet to be released in one month, BCS GM notes that monthly macro statistics already show that prime factors that led to improvement in growth dynamics include the removal of strict quarantine restrictions in services and trade in June.

Other support factors include a major rise in domestic tourist traffic after the closure of many foreign destinations due to the pandemic, a rise in housing construction that got a boost from state-subsidised mortgages, and a better grain harvest this year compared to 2019.

"Overall, the main reason why [the] Russian economy has suffered less during the pandemic could be linked to its outdated and commodity-based structure," BCS GM suggests, also giving credit to a "vast government experience in dealing with many crises over the past few years".

Russian supply woes have driven European gas prices to previously unimaginable levels, but why are electricity prices so high?

Russia is now the only country in Europe where inflation is falling thanks to the determined action by the central bank that has been tightening monetary policy since March last year.

CPI inflation in Moldova hits 33.6% y/y in July
7 hours ago
How do high gas prices push up the cost of power?
15 hours ago
Russian inflation falls to 15.1% in July
15 hours ago
Russia’s current account surplus hits new all-time high of $166bn
19 hours ago
Poll shows every other Russian supports continuing the war against Ukraine
1 day ago