Russia’s federal budget in surplus of 3.6% for first time since 2011 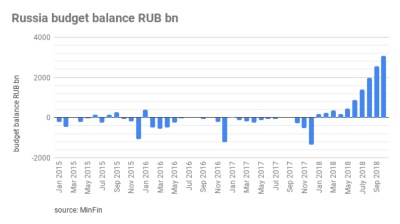 Russia’s federal budget revenues were RUB15.8 trillion ($233bn) in January-October 2018, exceeded expenditures of RUB12.78 trillion by RUB3.02 trillion ($44.1bn) handing the government a surplus of 3.6% of GDP, the Ministry of Finance reported on November 13. The primary surplus, that excludes the cost of servicing public debt, was even higher at 4.5% of GDP.

Russia started this year expecting a budget deficit of 1.3% of GDP, but with the unexpected strong performance of oil prices the situation with Russia’s public finances improved dramatically. Oil prices averaged about $65 per barrel in the first quarter, against the budget assumption for this  year of $40, and grew to an average of about $75 in the second quarter, topping $80 on occasion in the third quarter. However, this week a stand off between the US and Saudi Arabia shook markets and oil prices fell below $65 for the first time since March this year on November 13. Nevertheless, with sanctions back in place on Iran analysts speculate that $100 oil is possible soon.

The Russian treasury’s revenues have been growing all year long at an accelerating pace, primarily due to this rise in oil prices. Oil and gas revenues met 99.8% of the budget plan for the whole year after only the first ten months.

The last time the federal budget was in a headline surplus was in 2011 when revenues exceeded expenditures by RUB442bn.

All oil revenues in excess of $40.8 per barrel are sterilized and sent to the National Welfare Fund (NWF), which accumulated RUB3.55 trillion as of November 1 and is expected to reach at least RUB4 trillion by the end of this year.

Even with the accumulation of new reserves in the NWF and the higher than expected oil revenues, the Ministry of Finance remains extremely reluctant to increase the cut off oil price for the budget rule from $40 that would spur more badly needed economic growth. Former Finance Minister and co-head of the presidential council Alexei Kudrin has been calling for the threshold to be increased to $45. However, the liberal forces in charge of Russia’s economic and fiscal policies are erring on the side of extreme caution, preferring to build up the reserve fund cushion in the good times at the cost of slower growth, rather than gamble with less reserves while chasing faster growth. Ironically it was Kudrin himself that initiated this policy while he was Finance Minister.

Romania’s inflation up in April on higher fuel and electricity prices
Romania’s net wage hits record €726 in March
ING: Hungary's inflation is back to 2012 levels and above 5%