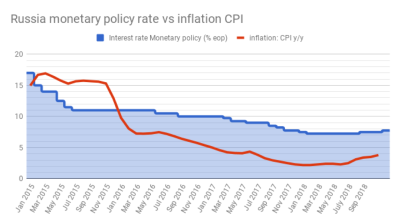 The Central Bank of Russia has hiked its policy rate by 25bp to 7.75% in a cautious move. / bne IntelliNews.
By Ben Aris in Berlin, Vadim Dumes in Paris December 14, 2018

The Central Bank of Russia (CBR) has hiked its policy rate for a second time this year, adding 25bp to the overnight rate to bring it to 7.75% at a closely watched monetary policy meeting on December 14.

"The decision taken is proactive in nature and is aimed at limiting inflation risks that remain elevated, especially over the short-term horizon. There persists uncertainty over future external conditions, as well as over the reaction of prices and inflation expectations to the upcoming VAT rate increase. The increase in the key rate will help prevent firm inflation anchoring at the level significantly exceeding the Bank of Russia’s target," the regulator said in its statement put out after the meeting.

Conflicting signals
Prior to the rate-setting meeting, analysts were evenly divided on whether there would be a rate hike this month as the economy is giving off conflicting signals. Out of analysts surveyed by Bloomberg, 15 believed that a minimum hike of 25bp was possible, but 23 expected the CBR to keep the benchmark rate on hold. Analysts may not have paid close enough attention to the words of CBR governor Elvira Nabiullina. Prior to the monetary meeting, she said that both hiking and keeping the rate flat would be equally considered.

In September, as inflation broke beyond the CBR's forecast range of 2.8-3%, while sanctions pressure provoked volatility and pressure on Russian assets, the national lender surprised analysts by front-loading the monetary policy rate with a preventive 25bp hike to 7.5%.  Satisfied with the results of that intervention, the regulator then held the rate in October.

Inflation was 3.8% in November (the last data available), still below the central bank’s target rate of 4%. The CBR said on December 6 that although CPI inflation had already accelerated to 3.9% as of December 10, it was not expected to breach 4% in 2018.

“This November’s upward movement of inflation was largely driven by annual food price growth accelerating from 2.7% to 3.5%. This was supported by changes in the balance of supply and demand in certain food markets," the regulator said.

The official inflation band according to the CBR’s forecasts for the consumer price growth rate is 3.9-4.2% by the end of 2018.

The hike in VAT from 18% to 20% has already fed through into an increase in inflation as Russians accelerated big-ticket purchase plans ahead of the increase.

"The Bank of Russia’s view of the Russian economy’s mid-term growth prospects has remained mainly unchanged. In 2019, the forthcoming VAT increase might have a slight constraining effect on business activity (mostly in the beginning of the year)," the CBR statement said.

General pessimism
But in addition, the population’s expectations for inflation remain very high at circa 9%, due to the general pessimism caused by the slow pace of the economic recovery and the volatility that has plagued the ruble this year, thanks to the see-sawing of the exchange rate on the back of some big swings in the price of oil.

The ruble immediately gained against the dollar as soon as news of the rate hike broke: the dollar fell by 7 kopecks to RUB66.37. Nevertheless, the dollar rate was 0.2% higher than at the close of trading the day before. The euro dropped by 10.2 kopecks to RUB74.95, which was 0.37% lower than on December 13.

The CBR is probably preparing for more ruble volatility after the holiday season, with the US government threatening to impose “crushing” sanctions on Russia.

The hike will only further enhance CBR governor Nabiullina’s growing reputation as the “most conservative central bank governor” in the world.

The rate hike will further contain growth in 2019, despite this week’s reappraisal of the rate of growth in 3Q18. The revision increased the previously stated 1.3% to 1.5%. But the growth rate still remains well below potential.

Whopping surplus
Russia is running a very comfortable whopping surplus of RUB3.4 trillion ($45bn or 3.7% of GDP), which is higher than consensus expectations by RUB0.3 trillion. At the same time it has the lowest external debt of any major economy in the world, at 15% of GDP. Yet the government is running an austerity programme that saw expenditures cut in the first 10 months of this year by 2% and refuses to borrow.

As there is no intention to change this approach any time soon, the upshot is that low growth will persist for the next few years unless deep structural reforms are made. Russia's GDP growth rate in 2019 will be in the range of 1.2-1.7%, but the rate could increase in the future as economic measures are undertaken, the RCB observed.

"The newly attracted budgetary funds will be used to boost government spending, including spending on investments, as early as 2019. As a result, according to the Bank of Russia forecast, GDP growth in 2019 will range between 1.2% and 1.7%. The following years might see higher growth rates as the planned structural measures are implemented," the regulator said.

The government is pinning its hopes on a change in Russian President Vladimir Putin’s May Decrees programme, but that will not alter much in the short term.

Bankers are expecting the hike to be the last for a while. They expect the central bank to return to cutting rates, although they also say that cuts may not appear until 2020—much depends on what happens next in the sanctions saga.

Nabiullina already warned the market to “not be afraid of a little hike now, to prevent a larger one later” in November.

External pressures playing large role
"However paradoxical this could sound, a reactive hike of the rate is lowering the chances of more substantial monetary toughening in the future," Nabiullina said. She went on to make it clear that external pressures are playing a large role in her calculations.

Russia is currently under "serious external pressure" and the CBR's goal is “not to allow this pressure to hold the economic development of the country back,” Nabiullina said.

The CBR underscored the same point in its statement following the rate hike announcement.

"The Bank of Russia will consider the necessity of further increases in the key rate, taking into account inflation and economic dynamics against the forecast, as well as risks posed by external conditions and the reaction of financial markets," according to the press release.

Other factors the CBR cited as leading to the rate hike included the fact that this week global oil reserves started to climb again for the first time in a year. That suggested that oil prices will fall again in coming months.

Vulnerable to sharp oil swings
While cost cutting and improved tax collection have led to the break-even price for the price of oil falling a little further to $50, according to ING Bank, down from previous estimates of $53, the Russian budget remains vulnerable to sharp swings in the cost of a barrel of oil. Currently oil is trading at a little over $60 a barrel.

"In the fourth quarter, oil prices remain above $55 per barrel included in the baseline scenario assumptions for 2019-2021. However, the risks of supply exceeding demand in the oil market in 2019 have increased," the regulator said.

Finally, the CBR said that from next year it would resume forex purchases that were suspended in the summer.

"The increase in the key rate is proactive and will limit the risks of inflation staying at a level significantly exceeding the Central Bank goal. The forecast takes into account the decision made by the Bank of Russia to resume regular purchases of foreign currency on the domestic market as part of the budgetary rule, starting on January 15, 2019," the regulator said.