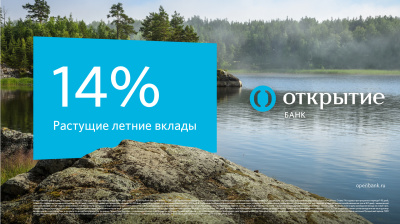 Russia’s central bank on August 29 ended weeks of speculation by announcing it will take over the struggling Otkritie Financial Corporation, the second biggest private bank in the country, marking the first time that a “strategically important” Russian bank has had to be rescued.

The Central Bank of Russia (CBR) imposed temporary administration on the bank on August 29 and intends to transfer the bank to a recently recreated bailout fund, the Banking Sector Consolidation Fund.

“The Bank of Russia took a decision to implement measures aimed at improving the financial stability of FC Otkrytie [sic],” the CBR said in a statement, adding it intends to support the bank and allow it to continue normal operations.

The CBR said it will become the bank’s “main investor” using the funds of the new fund to recapitalize Otkritie.

The rehabilitation will take place with the participation of the current owners and managers of the bank, the CBR said, although those people as well as other senior managers have already been removed from operational control after the appointment of the interim administration.

The CBR has not introduced a moratorium on meeting creditor claims, although recently it has become frequent practice in bank bailouts, and no payments from the Deposit Insurance Agency (DIA) are necessary at this point, it said. The bank will continue to function as normal, the CBR stressed.

The decision brings almost two months of uncertainty that has shaken the entire Russian financial sector to a close. bne IntelliNews revealed on August 11 that market sources were warning the bank was “in trouble”. That weekend the bank’s ATMs stopped working temporarily and deposits started flooding out the door.

Since then, Otkritie has desperately been trying to shore up trust and took a string of measures to raise more cash, including selling down about 85% of its bond portfolio, tapping the CBR repo facility, selling off its bad debt portfolio and taking one unsecured loan from the CBR of an undisclosed size last week. In all, it is estimated that Otkritie has tapped the CBR for RUB333bn ($5.7bn) in aid, reported Kommersant.

As yet there is no information on how big a hole there is in the bank’s balance sheet. However, it is possible that it could break the previous record set by the Bank of Moscow that had a $9bn hole in its balance sheet and needed a $14bn bailout after it was taken over by VTB in 2011. The bank’s former manager Andrey Borodin fled an arrest warrant in Russia for London where he now lives in a very nice house in Henley.