Russia's CBR hikes key rate to 8.5%, as inflation trends at double the target 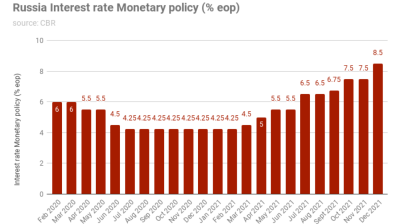 The Central Bank of Russia (CBR) has resolved to hike the key refinancing interest rate by an aggressive step of 100 basis points (bp) from 7.5% to 8.5% at the last policy board meeting of 2021 on December 17.

As followed closely by bne IntelliNews, the decision was expected by the market, as inflation continued to defy CBR's target posting 8.4% year on year in November. This makes the seventh interest rate hike since March 2021, lifting the key rate by a total of 4.25 percentage points to 8.5% or the highest since 2017.

Last time, in response to persistently high inflation, the CBR ramped up the key interest rate by 75bp to 7.5% on the previous policy meeting of October 22.

Following the December's meeting, the CBR stressed that inflationary expectations remain elevated, while inflationary factors persist, especially on the demand side amid supply bottlenecks. The regulator opted for a bold 100bp hike even despite some moderation seen in the latest inflation data, which had some analysts believe that the CBR would contain the hike to 75bp.

The regulator also maintained a hawkish rhetoric, saying in the accompanying statement that further growth in key interest rate is possible. "While today's decision [of 100bp hike] was already priced in by the market, maintaining the hawkish stance [by the CBR] is rather surprising," Aton Equity analysts commented.

The CBR maintained the 4%-4.5% annual inflation target "by the end of 2022", which is likely to lead to more interest hikes in 2022, as forecasted by the analysts surveyed by RBC business portal this week. Previously Governor of the CBR Elvira Nabiullina reiterated the policy goal of curbing inflation to 4% "at any price".

The regulator is seen carrying the aggressive monetary policy into 2022, after the battle against inflation has been lost in 2021. This could lead to the key interest rate in Russia approaching 9% or even double-digits. Even so, the goal of 4-4.5% inflation by the end of 2022 previously set by the CBR is already seen as unrealistic by the analysts.

The next policy board meeting of the CBR is scheduled for February 11, 2022.