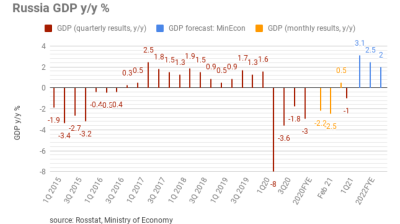 Rosstat revised down Russia's economic contraction in the first quarter to -1% and the economy went back into the black in March. A recovery is gathering pace and there could be a growth spike in the second quarter, say economists.
By bne IntelliNews May 18, 2021

Rosstat released its first estimate of Russia’s 1Q21 GDP dynamics based on the production method, and revised up the contraction in the first quarter of this year from -1.4% to -1%, the state statistics agency said on May 17.

Russia’s economy suffered surprisingly little damage during last year’s annus horribilis, which is doubly surprising as the 3% of GDP the government spent on stimulus measures was also one of the most frugal in the world. According to Sber, the economy is now just a tad below the level it was at the end of 2019 and has almost made back all the ground it lost in 2020 to the multiple shocks.

Rosstat also reported earlier that the economy had returned to growth of 0.5% in March, but the contractions of 2.2% and 2.5% in January and February respectively were enough to ensure there was a contraction for the first quarter as a whole.

“The estimate appeared to be better than our and market expectations (-1.4% year on year and -1.2% y/y respectively), as well as Ministry of Economic Development estimates (-1.3% y/y),” Sberbank CIB said in a note.

The most notable improvement was seen in market services rendered to the population, the contraction of which eased from 12.7% y/y in 4Q20 to only 1.6% y/y in 1Q21.

“As we noted after the release of the key economic indicators for March, both production and consumption indicators pointed to a strong recovery momentum when accounting for the low base, calendar days and precautionary demand,” Sber said. “On our estimates, the economy is now just an inch below its pre-pandemic level (98.6% in 4Q19).”

Economic activity has clearly started to bounce back from March and is expected to gather momentum from here. Sber speculates there will be a growth spike in the second quarter of this year due to the base effects after business was brought to a standstill by last April’s countrywide strict lockdown and the collapse of the oil prices following the failure of the OPEC+ deal.

There are still several unknowns in the short term, as due to the reluctance of Russians to get vaccinated experts worry about a fresh wave of the pandemic breaking out in the late summer. But analysts hope the strength of the recovery will carry enough momentum to see growth continue in the second quarter.

“If the pace of 1Q21 is sustained (we expect a limited effect from the non-working days in May), the economy could expand 8.3% y/y in 2Q21 and bring overall y/y growth to 3%,” Sber said. “We see a greater chance that the upside risks to 1Q21 SA quarter-on-quarter growth rates will materialise this year and keep the recovery momentum high, e.g. the very gradual recovery in outbound tourism will promote greater consumption at home. As such, we revise our 2Q21 and 2021 forecasts to respective growths of 8.5% y/y and 3.4% y/y.”

Russia’s PPI inflation up 1.5% to 28.6% in August
38 minutes ago
Montenegro’s economy posts strong 19% y/y growth in 2Q21, higher than EU average
1 day ago
Russia’s Duma elections statistics: the comet effect and the Moscow blob
3 days ago
Romania and Latvia's car ownership rates among lowest in Europe
3 days ago
Bank lending in Romania gradually returns to retail-driven pre-crisis pattern
3 days ago