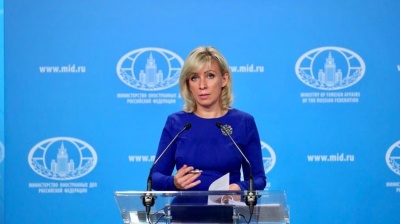 Many anonymous audio recordings were revealed during the pre-election campaign, compromising politicians from both the ruling SDSM and the opposition VMRO-DPMNE. There were also a series of hacker attacks around election day, including against the State Election Commission (SEC) website. However, no official accusations have been levelled at Moscow in connection to the vote.

Zakharova commented on the election in response to a journalist’s question, and accused Western politicians of hypocrisy and a “cynical use of double standards”.

“It was not difficult to notice a series of video messages posted by senior Western politicians during the election campaign in North Macedonia that openly and persistently called on people to vote for one or another party. Against the background of this foreign interference, speculations about certain Russian influence are absolutely unfounded and completely absurd,” Zakharova said.

The election resulted in a slim victory for the SDSM, which won only two more seats in the parliament than VMRO-DPMNE, making the formation of a new cabinet difficult.

Russia is seen as a supporter of the previous regime under VMRO-DPMNE that ruled North Macedonia for a decade, while western politicians have welcomed the recent progress towards EU accession under the SDSM. Russia was also against North Macedonia’s decision to become a Nato member, which happened earlier this year.

Pranksters from Russia published some of the recorded conversations released in the run-up to the vote involving ex-PM Zoran Zaev and other SDSM leaders.

It is not known who was behind the hacker attack on the SEC website that disrupted the publication of the results.

However, hacker group AnonOpsMKD has claimed responsibility for the attacks on the news aggregator Time.mk on election day and the websites of North Macedonia’s ministries of health and education a few days ago. The ministry websites are still not functioning.

The group — which says it was not behind the attack on the SEC site — warned of “chaos” in the country if parties allow the appointment of an ethnic Albanian prime minister. The ethnic Albanian Democratic Union for Integration (DUI) is pushing for this after it was put in kingmaker position by the election.

AnonOpsMKD has warned that many sites will be brought down in the near future. “We are preparing for 30-40 attacks within a few weeks. Someone has to react like this because nothing good has been done in the country in the last 20 years,” the group was cited as saying.

Stefanoski also commented that messages from foreign countries should be viewed in a wider context and with a higher purpose.

"We are entering a sensitive period in the Balkans. So it is obvious that the status of Kosovo and the negotiations with Serbia should be resolved," Stefanoski was cited.

"We also got the information that a leader of a political party has been called as a witness, which speaks of the fact that there will be a tendency of foreign countries to interfere in the context of resolving the Serbia - Kosovo dispute and use the situation to destabilise the region," he added.

Ali Ahmeti, the leader of the DUI, said on July 22 he has been summoned for questioning at The Hague-based war crime court for his role in the militant group Kosovo Liberation Army (KLA).