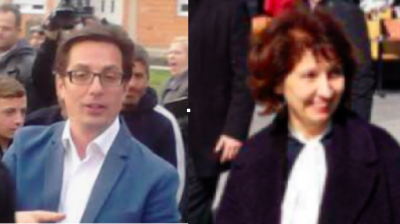 By Valentina Dimitrievska in Skopje March 31, 2019

The election, the sixth for the president of the former Yugoslavian country, is the first test for the governing coalition of the Social Democratic Union of Macedonia (SDSM) and its junior partner the ethnic Albanian Democratic Union for Integration (DUI) since the signing of the Prespa agreement, otherwise known as the name deal, in 2018. Under the name deal with Greece, the country’s name was changed to North Macedonia, unlocking its Nato and EU integration processes.

Highlighting the importance of the vote for the ruling coalition, which struck the deal with Athens, Prime Minister Zoran Zaev has said that if Pendarovski loses the presidential vote then a snap election will be called.

The ruling coalition led by Zaev's Social Democrats and also supported by 30 smaller political parties picked the country’s coordinator for Nato accession, Pendarovski, as its candidate.

His main rival is Siljanovska-Davkova. The two are seeking to replace Gjorge Ivanov, also a former law professor, who, backed by VMRO-DPMNE, has served two five-year mandates and is therefore not eligible to stand again.

Albanian parties Besa and the Alliance for Albanians picked Blerim Reka for their candidate, but he has a little chance of progressing to the second round.

Ahead of the start of the campaign period on April 1, opinion polls show a slight lead for Pendarovski. A poll conducted by local pollster M-Prospekt shows that 25% of those surveyed support Pendarovski, 22.4% would vote for Siljanovska-Davkova and 10.1% for Reka. According to an internal poll ordered by the governing SDSM party, Pendarovski leads by 8 percentage points (pp) to 10 pp.

Siljanovska-Davkova will launch her campaign in the city of Ohrid, Pendarovski in Prilep and Reka in the capital Skopje.

The Prespa name agreement, EU integration and the economy will be in the spotlight of the campaign, according to analysts.

Pendarovski is expected to focus his campaign on the need for reforms and the implementation of the Prespa deal as a prerequisite for launching EU accession talks.

Zaev said he wants a “crystal clear election” as part of requirements for the country to launch accession talks later this year.

The spokeswoman for the North Macedonia’s State Election Commission (SEC) Ljupka Gugucevska said that all preparations have been made for a fair and democratic election.

The campaign will last until April 19. 1.8mn people are eligible to vote in North Macedonia.

If no candidate wins 50% of the votes then a second round will be held on May 5 when the choice will narrow to the two candidates with most votes. In the second round, the turnout has to be at least 40% or around 723,000.

Experts have warned that if Siljanovska-Davkova fails to win sufficient votes in the first round, then the opposition may boycott the second round.