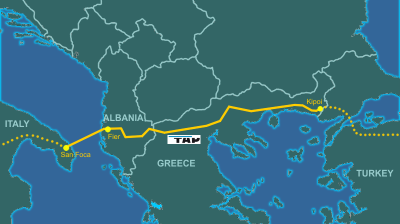 Scrapping TAP would be a big blow to Azerbaijan and gas transit-fee countries along the Southern Gas Corridor as well as to the EU's gas source diversification plans.
By bne IntelliNews October 30, 2018

Italy’s populist 5-Star Movement has backed off from its electoral pledge to stop the last leg of the Southern Gas Corridor (SCG) pipeline project designed to bring Azerbaijani gas to the EU via Georgia, Turkey, Greece, Albania and a route under the Adriatic Sea.

The U-turn, announced by Italian Deputy Prime Minister Luigi Di Maio, sparked a row over broken environmental promises in Italy, but no doubt came as a huge relief to Azerbaijan which with BP has developed its giant $28bn Shah Deniz 2 gas field in the Caspian Sea with European markets in mind. Countries along the SCG route will also be pleased given the transit fees they stand to collect.

Di Maio on October 29 called for unity within his 5-Star Movement after the anti-establishment party said it was forced to make the move because Italy would face penalties of €20bn if it blocked the project at this late stage.

Former party sympathisers the previous day set fire to the 5-Star flag in the southern Italian town of Melendugno—the planned terminus of the SCG’s Trans Adriatic Pipeline (TAP) final leg—in a protest against the party’s decision which flies in the face of commitments it made ahead of the March elections.

Di Maio faced ridicule and criticism on social media. He responded that the party was under attack, both from inside and out, and urged 5-Star supporters to close ranks in the same way ancient Roman soldiers locked their shields together to keep out enemy arrows.

“Today, in our army, some people are showing signs of weakness... We cannot allow ourselves such weakness,” Di Maio wrote on the party website.

“The slightest failure on any front means that all the land we have conquered will return to being no-man’s land.”

Di Maio said he found out how much it would cost to cancel TAP only after he had taken office and gained access to official documents. Ministers from the former government denied his version of events and said all documentation was public.

“5-Star promised to block (TAP) within two weeks (of taking office)... They won votes on the back of this promise. After six months they changed their mind. We lost the election, Italy has lost time. Di Maio has lost face,” Renzi said in a statement quoted by Reuters.

In early September, it was announced that former British prime minister Tony Blair, who has worked as a consultant on TAP since 2014, was set to meet Italian Interior Minister Matteo Salvini to discuss the environmental controversies that were threatening the TAP construction.

German Chancellor Angela Merkel underscored the importance to Europe’s gas diversification plans of the SCG infrastructure during her late August tour of the South Caucasus region.

In early October, with the row over whether to allow the completion of the pipeline still raging, Azerbaijan’s First Vice-President Mehriban Aliyeva paid an official visit to Italy.

The governing Italian coalition between 5-Star and Salvini’s Northern League became divided on the merits of the final SCG section. In July, Salvini said he would support the pipeline project, claiming it would help drive down gas prices in Italy. “The south of Italy needs infrastructure,’’ he said. “We need to move forward.’’

A few days later, Barbara Lezzi, the M5S minister for the south, responded, saying: “We do need infrastructure: we need roads, schools, train stations.” She suggested that building the pipeline would be a useless and harmful exercise. Di Maio followed up by saying: “The party has not changed its mind over the building of the pipeline.’’

Unesco sites
Italian environmentalists claim the Puglia area, which has two Unesco world heritage sites, will suffer as a result of the pipeline. There are also fears—dismissed by the consortium building TAP—that the pipeline will contaminate freshwater supplies. Activists have also claimed a beach will be turned into a building site, threatening the habitat of Mediterranean monk seals.

It is estimated that the Shah Deniz gas field in Azerbaijan has gas reserves of 1.2tn cubic metres and the EU is expecting to eventually receive 1.2m cubic metres per day via the SCG.

Three interconnected pipelines will make up the $40bn and 3,500-km SGC. The gas is to transit along an already completed extension of the 700-km South Caucasus Pipeline (SCP) to reach Turkey via Georgia. It then enters the 1,850-km and $8bn Trans Anatolian Natural Gas Pipeline (TANAP), launched on June 12, and traverses Turkey to flow to Greece. From there, the 878-km TAP is to take over the transit. BP says TAP should be operational in time to make commercial deliveries of Shah Deniz 2 gas to western Europe a reality by 2020. TAP is reportedly far more than two-thirds complete.

Army sent into Tirana airport after strike grounds all flights