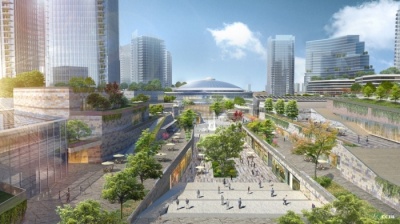 Tensions are rising within the Romanian ruling coalition as its members fail to find common grounds on an increasing number of topics.

The coalition was formed after the general elections last December by the National Liberal Party (PNL) with junior members USR Plus, a party set up relatively recently and advocating for radical reforms, and the Democratic Alliance of Hungarians in Romania (UDMR).

The latest issue to publicly divide the parties is the €3bn Romexpo development in Bucharest. PNL president and speaker of the Chamber of Deputies Ludovic Orban, admitted on June 17, that “there is no consensus among the ruling coalition’s members” regarding the Romexpo real estate project in Bucharest CBD. This includes deal under which 46ha of land worth €300mn-500mn would be handed over for free to the Chamber of Commerce and Industry (CCIR) for the development.

The deal, initially approved by the PNL and the opposition Social Democratic Party (PSD) in the past legislature, passed unnoticed until it was close to being promulgated, when USR Plus first brought the issue to the media.

CCIR, an NGO defined as “of public interest”, has the right to use the land for another 32 years and claims that unless it is given full ownership rights the land will remain unused. It already announced a partnership with major local developer Iulius Group, but promised to use “for the benefit of Romanian business community” the dividends derived from the new mixed-use project to be built on the land.

USR Plus has spoken out strongly against the “fraudulent” deal, while the PNL, according to Agerpres, is now considering its position.

Asked why the decision is so difficult, Orban explained: "We still don't have a common point of view in the coalition and if we can harmonise the points of view so that we can support a certain form of law together, that's better, since we are a ruling coalition.”

The narrative of those criticising the land transfer is that it represents an unjustified transfer of wealth to the CCIR, which wants to put the land at the disposal of major real estate developer and investor Iulius Group for a €3bn mixed-use project.

The party referred the bill to the Constitutional Court, saying it which did not believe in the public benefits of granting a plot of land evaluated at over €300mn free of charge to a private entity like the CCIR (the beneficiary of the land is Romexpo, controlled by the CCIR). The court didn't see any constitutional issue and cleared the draft, but it was returned to parliament by President Klaus Iohannis in April.

They have also clashed over Romania’s National Recovery and Resilience Plan (PNRR).

NEMETHY: Is the world heading towards a “polycrisis”?
Bonds of Romanian online retailer Elefant plunge on weak H1 results
Romanian president tries to save flagship education strategy after plagiarism scandal