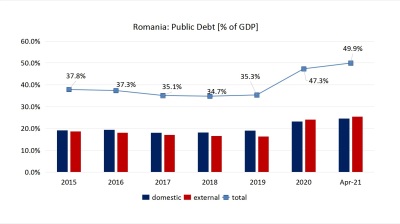 Public debt as a percentage of GDP will reach approximately 54% in a horizon of 12 months, according to the latest poll of members of the CFA Romania Association, carried out in June.

Romania’s debt leapt by RON20bn in April alone and the debt-to-GDP ratio edged by 1.9pp.

Over the previous year, public indebtedness soared by RON125.6bn and the debt-to-GDP ratio deteriorated significantly by 12pp to 47.3% at the end of the year.

Speaking about public borrowing — which the opposition Social Democrats argue will further increase the burden on future generations — Prime Minister Florin Citu stated that “the debts are only for profitable investments”.

Romania’s external debt will increase by another €16bn as a result of the Resilience Plan alone in the years until 2026.

Separately, fiscal consolidation is supposed to ease the pressure placed on public debt by the fiscal deficit. The public budget gap is supposed to drop under 3% of GDP by 2024, but this year it is still planned to stand at over 7% of GDP — possibly to be revised downwards amid stronger than anticipated GDP growth in the year.