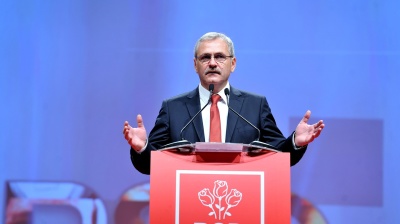 The leader of Romania’s Social Democratic Party (PSD) presented the party's economic programme for the December 11 general election on October 9. The populist programme includes hikes in the minimum wage and tax cuts in the coming years.

Although many of its most prominent figures are being investigated for corruption, the PSD still enjoys a lot of support in the country and is likely to win the election. The PSD and its close ally ALDE will get 52% of the vote and 56% of seats in the election, according to a poll conducted by Kantar-TNS for Save Romania Union (USR) in September. The survey showed that the PSD alone would get 45% of the vote, followed by the centre right National Liberal Party (PNL) with 25%.

The PSD’s governing programme also envisages that the average gross salary will reach RON3,100 in 2017 and RON3,950 in 2020. According to the latest data from the statistics office, the gross salary in Romania was RON2,878 in August. Pensions are also expected to rise.

The PSD also plans to cut social security contributions to 25% in January 2018 from the current 26.3%. Romania’s upper house of parliament, the senate, approved a draft bill envisaging a 5pp cut in social security contributions in June. The bill, which was initiated by the PSD, was criticised by the government, which said the contributions had already been cut by 5pp in 2014 and the proposed reduction would increase the budget deficit by RON3.5bn (€775mn, 0.46% of full year GDP) in the first six months, while next year it will have an impact of RON7.7bn, according to previous press reports.

The programme also envisages that pensions equal to or below RON2,000 should be exempted from income tax, which currently stands at 16%. Income tax should be cut to 10% for pensions above RON2,000, while all pensioners would be exempted from paying healthcare contributions. In September, the senate approved a bill that waives the 16% tax and the 5.5% healthcare contribution for pensions. The payments are waived for pensions below RON1,050 (€233) currently. The government also opposes this bill, which it says would cost RON2.2bn (0.27% of GDP).

The PSD also proposes that VAT should be cut to 18% as of 2018, while VAT for house sales should be totally eliminated in 2018.

Romania plans to cut the VAT rate from 20% to 19%, abolish the supplementary excise duty paid on car fuels and also abolish the tax on special industrial assets as of January 2017. The impact of the tax cuts on budget revenues was estimated by the International Monetary Fund (IMF) at 0.75% of GDP.

Romania cut VAT by 4pp in January, after a 19pp cut in VAT on food last June.