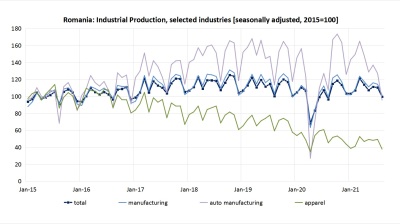 Romania’s seasonally-adjusted industrial production index stagnated in August for the fourth month in a row, dragged down by disruptions in the automobile industry and long-term contraction of light industries.

Romania’s car production halved to 29,077 units in September, compared to the same month last year (57,846 units) and even compared to September 2019 (37,153 units) before the two major companies launched new models. Despite many carmakers hoping that the semiconductors shortage will subside this autumn, production data show that the problem tends to become even more pressing.

In contrast, the production of electric and electronic devices keeps growing at robust rates while other industries such as those of construction materials and metallic constructions have maintained an upward trend as well.

As of August, Romania’s industrial production index increased by 3.1% y/y, while lagging 0.8% below the level seen in August 2019, before the crisis.

In the first eight months of the year, the total output increased by 12.7% y/y, but this is not particularly relevant, given the low base effects.

Compared to the first eight months of 2019, industrial output was 2.8% lower.

Automobile production was 8.7% smaller in January-August this year compared to the same period of 2019 (based on industrial output data), while apparel production contracted by over one third (-35%).

As opposed to the light industries, that are in the process of a long-term decrease that gained momentum during the pandemic, automobile production had gained ground before the crisis and it seemed to recover in the months after — only to be depressed by the semiconductor crisis this year.