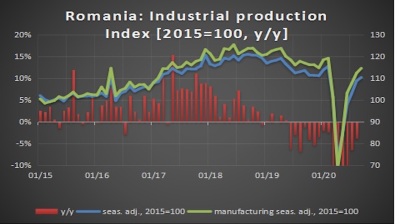 Romania's industrial production returned in September to the same level seen in the same month last year, while the manufacturing sector's output increased marginally by 0.4% y/y.

This was the best annual performance after 15 months of negative growth rates.

For the entire third quarter, industrial production contracted by 3.4% y/y, but this was a visible improvement from the 26.7% y/y plunge seen in Q2.

The industrial output also rose by 7.4% q/q in seasonally adjusted terms, after the 15% plunge in Q2.

The quarterly data indicate a partial recovery in Q3 after Q2 — while the short-term series indicates a nearly complete recovery as of September, compared to the situation before the crisis (February).

Under a combination of a tight labour market, a shift to higher value-added production segments and sluggish external demand, Romania's industrial production started to decline in mid-2019, a trend that accelerated during the crisis months of April-May.

The post-crisis recovery began in June. In September, the overall industrial production (extractive, manufacturing, and utilities) was only 4.4% lower compared to February in seasonally adjusted terms. In the manufacturing sector, the lag is only 3.9%, so overall production nearly returned to the pre-crisis level.