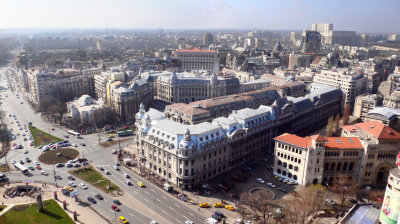 The mayor of the Romanian capital Bucharest (pictured) has asked the government for an extra €250mn.
By Iulian Ernst in Bucharest June 12, 2019

Romania’s Finance Minister Eugen Teodorovici has reportedly signed and circulated among ministries a letter requesting them to “reduce the number of employees and/or the total salaries”, according to a document published on Facebook by opposition MP Vlad Alexandrescu of the Save Romania Union (USR).

The letter was published shortly after Bucharest Mayor Gabriela Firea announced that the Romanian capital is under “undeclared bankruptcy”, and asked Teodorovici for an additional €250mn for the municipality.

It is unclear whether this was the initial budget planning, and if so, why not all the necessary money was included in the budget. But Teodorovici wanted to make clear one thing: money set aside for large investment projects will no longer be sacrificed.

“The finance ministry can’t agree with the increase in the payroll envelope during the budget rectifications, as this can only be done at the expense of capital expenditures,” the document signed by Teodorovici reads.

When the document was made public, Teodorovici claimed that there is enough money for pensions, salaries, and investments for the whole year 2019, but “if public spending can be adjusted reasonably, why not do this?”

The news broke after a couple of years of rising public sector pay as part of the populist measures announced by the ruling Social Democratic Party ahead of the 2016 general election. While this fuelled consumption and in turn economic growth, it has raised concerns about the state of Romania’s public finances.

Ironically, Prime Minister Viorica Dancila has just sacked her economic advisor for mentioning the need to cut personnel and generally the waste of money in the public sector. Eugen Borza was dismissed after only one week in the position.

To government’s rising expenditures, Bucharest municipality added its request for €250mn, shortly after Firea (seen by some as the ruling party’s possible candidate for this year’s presidential election) has borrowed €100mn from the government’s treasury to pay municipality’s bills and avoid hot water shortages.

Firea admitted at the end of last week that the municipality faces a RON1bn (€210mn) budget deficit this year, 0.1% of the country’s GDP. Then MP Nicusor Dan, former leader of the USR, quoted a document mentioning a RON2.37bn deficit. Firea claims that weaker allocations from central government this year explain this, but this is only partly true: the allocations dropped by RON460mn while RON1.9bn were simply earmarked as potential incomes never to be collected.

On top of this, power and heating company Elcen wants to ask in court for €3.7bn from Bucharest municipality to cover the city hall’s unpaid bills. Elcen will select a legal consultant to file a court actionl. The situation could have been avoided through the merger of Elcen with the municipality’s heating distribution firm Radet, which failed due to the uncertain legal status of the municipality’s utilities companies. The municipality covers about half of the heating costs for Bucharest residents, but the unpaid bills have piled up.