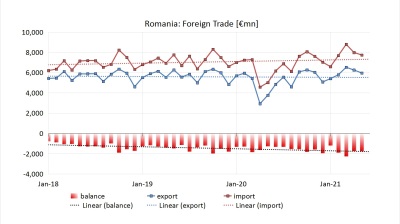 Romania’s trade gap widened by over 20% in January-May compared to the same period in 2019.

In May, Romania’s exports were still 5% below those in May 2019 despite the misleading 59% y/y advance, and this is still a good performance given the state of the global supply chains.

Revenge spending is visibly pushing up imports (hence the trade gap) at the expense of both domestic balances (demand-driven inflation) and external balances (the foreign trade gap).