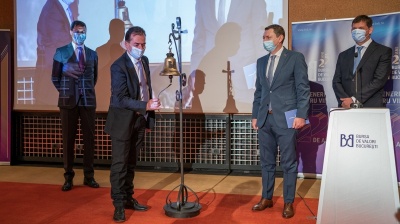 This is an important moment for Romania and its capital market, which thus enters the universe targeted by a wider category of investors, namely emerging markets funds that together have billions of euros under management. Previously, such funds were unable to invest in companies listed on the BVB due to its status as a frontier market.

The promotion to emerging market status comes 25 years after the BVB was re-established in 1995, after being closed during the communist era. “The story of the Bucharest Stock Exchange is, for the most part, the story of modern Romania and is part of our national DNA because it demonstrates the ability of this nation to mobilise itself to achieve an extremely ambitious country goal,” said Radu Hanga, chairman of the BVB board, at a ceremony on September 21.

“[A]after a quarter of a century of work and alignment with the highest standards, the Romanian stock market has reached the level of requirements imposed by our international peers. Never in the recent history of the country has there been such an extensive economic project that would require so much effort and determination over such a long period of time.”

"We are witnessing a historic moment. It is a clear and indisputable international recognition that the Romanian capital market receives. It is more than a validation of the values promoted by the capital market; it is a validation of Romania’s efforts to be included in an unprecedented investment universe,” said BVB CEO Adrian Tanase.

The two Romanian companies to be included in the FTSE Global All Cap Index, and three other indexes, are lender Banca Transilvania (TLV) and energy producer Nuclearelectrica (SNN).

Nuclearelectrica and Banca Transilvania met the FTSE Global All Cap Index eligibility requirements as of June 30, BT Capital Partners stated in its monthly report. Romania’s share in these indexes will be under 0.4%.

However, investment funds focused on emerging markets are now likely to look at other Romanian companies as well.

"Romania has the chance to seize the opportunities offered by the new emerging market status because there are several candidate companies that could meet the liquidity criterion at this moment. New issuers will be able to enter the FTSE Russell indices if they meet the liquidity criterion in the following evaluations. The consolidation of this newly won status can be achieved only by increasing the number of Romanian companies included in the Emerging Markets indices, and this means that we will have more valuable and stronger Romanian companies, which will contribute to the development of the Romanian economy,” commented Tanase.

FTSE Russell, one of the leading international stock indexes providers, decided to promote Romania from frontier to secondary emerging market in September 2019.

The other major index provider, S&P Dow Jones, still has Romania on its watchlist for a similar promotion.

The BVB’s elevation to emerging market status comes at a time when the coronavirus (COVID-19) pandemic and rising political and economic risks in some markets have seen investors in emerging markets capital markets flee for the first time.

Like other stock exchanges around the world, the BVB was affected by the pandemic. Romania’s BET index, which tracks the 17 most-traded companies listed on the BVB stood at 8,659 points at the end of the first half of the year, down 13.21%, which was the ninth most positive performance among EU stock exchanges.

According to data from the BVB, financial instruments in the equity and fixed income segments amounting to around €533mn were listed on the BVB in the first eight months of 2020.