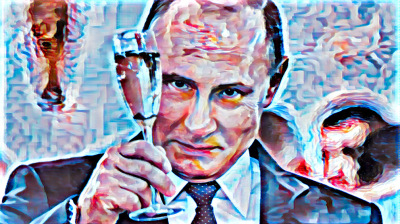 Putin’s downfall is now inevitable. What happens when he’s gone? It gets worse.

Vladimir Putin, the recidivist war criminal, might well have dreamt of Marilyn Monroe’s breathy returns in his ear or even the Nobel Peace Prize on a silver platter for his seventieth birthday. Pyramid of Tajiki melons and Belarusian tractor notwithstanding, the greeting he most likely received was a report of the latest in a string of Russian/Ukrainian villages (delete according to taste) to be reconquered by the enemy and news of sporadic outbursts of gunfire at enlistment offices across the realm.

What he wanted for his birthday…

Meanwhile, public dissent against the war, but more often mobilisation, has become more widespread and outspoken, and fissures are beginning to open up between various factions within the regime and without. The die was cast for Putin the moment his tanks trundled across the Ukrainian border in February. Russia’s defeat, and Putin’s downfall, are now inevitable. They are simply a question of time. It could be days. It could be months. Those hoping this looming cataclysm will usher in a new era of parliamentary democracy midwifed by cuddly oppositional liberals are naïve, though. The moral arc of the universe is long and it bends towards disappointment.

Autocracies are structurally incapable of the peaceful transfer of power, so Putin’s end will most likely result from a paroxysm of violence as warring blocs within the security services compete to press the claims of their chosen successor. It will be a case of ‘Which bastard is next?’ rather than who will be the best person to lead postlapsarian Russia.

Links between organised crime, state institutions and the security services in Russia are well-entrenched and thanks to books like The Vory by Mark Galeotti, equally well-advertised. The KGB managed to maintain control of the essential levers of power throughout the disintegration of the Soviet Union and the chaos that followed and it’s highly improbable, after some savage internecine feuding and bloodletting, they won’t still be in that position after Putin’s quietus.

The tentacles of the mafia and the FSB reach into every cranny of Russian society. Making a power play in the vacuum that will develop from Putin’s departure, be it political, economic or criminal, is fraught with danger. There’s nowhere in the public sphere for an authentic representative opposition to develop and the death throes of the Putin regime won’t provide any. The progress of Russian democracy is not suited to the human lifespan.

Even if Putin is forcibly removed from office there is no guarantee that the successful putschists won’t continue to prosecute the war under a new commander-in-chief. The whispering campaign against Putin’s military leadership – and that of his generals – suggests the error has been in not conducting the special military operation with sufficient vigour rather than regretting it was launched at all. Putin will be well aware that his immediate existential threat will come from his right flank rather than any genuine opposition.

The Russian economy, already kneecapped by sanctions and set to contract 6% in 2022, will shrink next year and underperform thereafter, according to most forecasts, almost regardless of who runs the country. Any period of civil unrest and political volatility will cosh growth even harder. The best Putin can hope for even if he somehow clings on to power is acting as some kind of petrol pump attendant for China.

Ethnic discontent is already stirring in the Caucasus, where the mobilisation programme has been the most punitive and the prospects for violent opposition to Moscow’s governance will increase dramatically with any kind of upheaval in the Kremlin.

It’s Dagestan but it could be anywhere

Separatist-leaning republics have long focused their discontent on central government but as the state becomes increasingly fissiparous then the chances are that long-standing resentments and ethnic rivalries will have them fighting each other. The only possible short-term benefit the world may derive from a palace coup is that the destructive forces in Russia may turn centripetal rather than centrifugal and this may de-escalate potential conflicts in Eastern Europe, the Middle East and Africa, not to mention Ukraine.

The economic, political and societal implications of Russia post-Putin, then, are uniformly bleak. The destabilisation of the world’s largest nuclear power generates huge geopolitical worry and the unforeseen or unintended consequences may be even worse than the admittedly grim vision adumbrated here. This is not a good argument for encouraging Putin to remain in power but it’s a warning against premature jubilation should the administration find its own von Stauffenberg.

Russian history does not foster grounds for optimism. The pessimist may think things can’t get worse, but the optimist knows ‘Oh yes, it can’. Whether Putin is strung up from a gibbet on a windy day or heads, hands bound, to The Hague on that flatbed truck, it will be different when he’s gone but probably not better. My favourite chernomyrdinka: ‘We wanted the best but it turned out like always’.