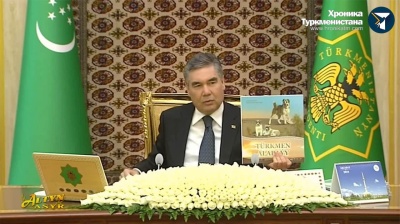 President Berdimuhamedov during one of his book signing events. The cheapest of his books, according to opposition newspaper in exile Chronicles of Turmkmenistan, is "The Source of Wisdom" at 40 manats.
By Nizom Khodjayev in Tashkent May 22, 2020

The black market rate of the Turkmenistani manat (TMT) to the dollar weakened as far as TMT23 this week, according to briefings that escaped the regime’s official censor and made it to the currency markets. That compares to the ludicrous TMT3.51 to the USD enforced under the official state-decreed exchange rate. The heightened economic stress that one of the world’s most closed countries is under is clear, brought home also by the sight of the official rate of the manat against the Russian ruble rising to a record-breaking 20.29 on May 20.

The official rates for the manat have stood unchanged since 2016 with Turkmen authorities all the while actively attempting to keep the 'hermit nation’s' now nearly five-year-long economic crisis hidden. Independent reports quite regularly paint a picture of food shortages and other manifestations of economic turmoil such as the inability of the authorities to make timely payments for major construction projects. The Central Asian country's economy is still hugely reliant on one product, natural gas, yet it is largely dependent on one buyer, China, requesting supplies. Since the collapse of hydrocarbon prices in 2014, the market recovery has never been strong enough to right the ship for Turkmenistan, thus the energy price crisis that has materialised amid hits to demand caused by the coronavirus (COVID-19) pandemic—with China’s appetite for gas substantially curbed—amounts to a deadly blow.

Attesting to the difficulties, S&P Global Platts reported on May 5 that Central Asian gas producers Turkmenistan, Kazakhstan and Uzbekistan were discussing a shared cut in gas supplies to China, as a result of the pandemic's impact on demand. It cited Uzbekneftegaz CEO Mekhriddin Abdullaev as saying: "China requested a cut, but indicated that any reduction in gas supplies would be carried out proportionally between Turkmenistan, Kazakhstan and Uzbekistan."

On May 18, Turkmen state television reported that Turkmenistan has ordered local firms to sell 100% of their hard currency export proceeds to the country’s sovereign wealth fund, up from the previous 50% requirement. The cash-strapped nation has been gradually tightening foreign exchange controls over the past couple of years. Lately, forex cash withdrawals from banks were banned with effect from April 1.

The black market (read: free market) premium in #Turkmenistan (% difference between official exchange rate & black market rate) has soared to 451%, producing huge profits for President #Berdimuhamedow & his cronies who have access to cheap foreign currencies at the official rate. pic.twitter.com/Pr5hUVYNAt

— Steve Hanke (@steve_hanke) March 7, 2020 in March that the “black market premium” formed by the difference between the official and unofficial rates of the TMT have proved a source of huge profits for Turkmen President Gurbanguly Berdimuhamedov and his associates. 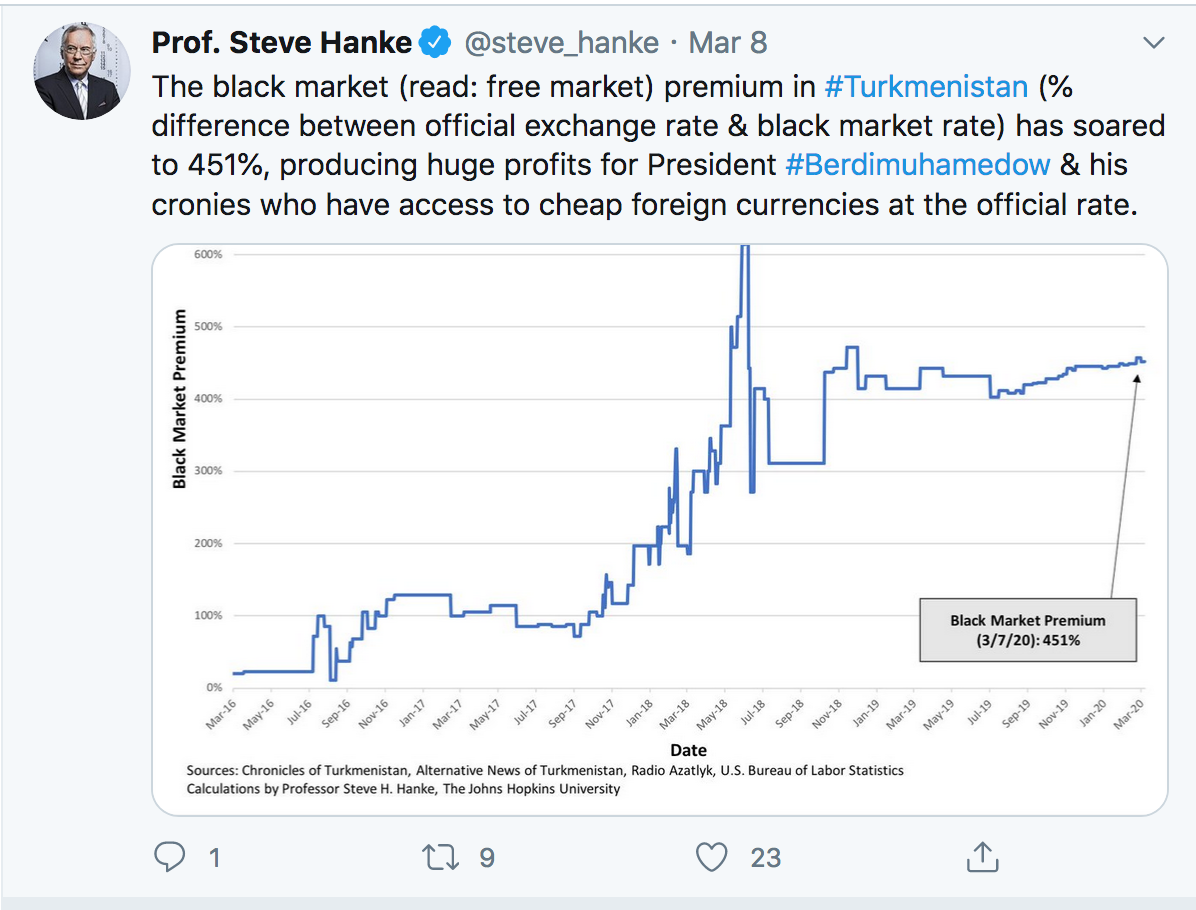 Windstorms and a rare protest

It is not only are economic events not going Turkmenistan’s way. The natural elements appear to be giving the remote nation something of a battering too.

Severe windstorms in recent weeks have hit eastern regions of the country, most particularly Lebap and Mary, killing several dozen people. Desperate to buy food and medicine, some residents have reportedly resorted to selling their cars, jewellery, livestock and household items to survive. The authoritarian government has apparently hardly moved a muscle to help the afflicted inhabitants. Officials have not mentioned the problems caused by the weather calamities and several people who took videos of damaged buildings are said to have been detained. The situation prompted an extremely rare demonstration, held in the city of Turkmenabat on May 14 and involving hundreds of people, according to Turkmen.news.

The heavy rain, meanwhile, is threatening Turkmenistan’s cotton harvest, which already has a difficult time on the market due to an international boycott aimed at stamping out child and forced labour in the cotton fields.

And what of the coronavirus (COVID-19)? Well, the ex-Soviet state has still not confirmed even a single infection on its territory, leaving analysts to try and gauge the reality of the situation by looking at evidence of possible coronavirus deaths, such as cases of people officially passing away from “severe pneumonia”.

Despite the “coronavirus-free” claim, Berdimuhamedov has notably approved a plan to impose restrictions on mass gatherings and ban swimming in the Caspian Sea at the Avaza resort and near Turkmenbashi. Also, despite relying on Iran for around 80% of its food supplies, with the pandemic in mind Turkmenistan shut its long border with Iran in late February, exacerbating the food rationing situation.

The World Health Organisation (WHO) has been attempting to secure an invitation to visit Turkmenistan to assess the coronavirus situation in the tightly controlled country. It cancelled one planned visit after an invitation did not come through. RFE/RL’s Turkmen Service had reported that over 400 people placed in a quarantine zone on the outskirts of Turkmenabat were being transferred to small provincial hospitals and a psychiatric clinic ahead of the scheduled visit.

The Jamestown Foundation’s Eurasia Daily Monitor on May 19 described the recent rare protest as “an ominous harbinger of problems to come”, citing exiled opposition politician Maksat Saparmuradov, who founded the Conservative Party of Turkmenistan in 2012 and formerly worked for the Turkmen security forces.

Saparmuradov projected that by June or July, Turkmenistan will face severe disruptions to its food security to the point that there will be riots and wide-scale mass unrest.

While it is too early to jump to apocalyptic conclusions, the seeming indifference and incompetence of the Turkmen authorities is particularly worrisome in light of the country’s shared border with war-ravaged Afghanistan. In a worst-case scenario, Turkmenistan could end up undermining Central Asian regional security as a whole.