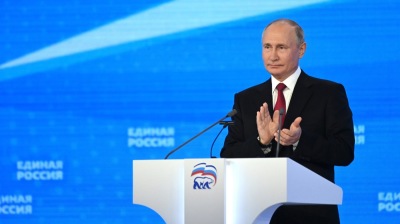 Keen to shore up the flagging fortunes of the ruling United Russia, President Vladimir has announced a new RUB100bn spending spree ahead of September's Duma elections. / wiki
By Ben Aris in Berlin June 21, 2021

The Kremlin’s election campaign is now well underway. While United Russia does not face any serious competition in Russia’s hybrid democracy the Kremlin needs to win as many genuine votes as possible, or it will face mass protests.

Political analysts believe that any election fix that adds more than 10% to the actual result can lead to protests, as was the case in the 2011 Duma elections where the powers that be added some 12% to the results according to expert assessment based on statistical studies of the voting patterns. The result was the biggest political demonstrations seen in a decade, with crowds of over 100,000 people gathering on Bolotnaya Square, just across the river from the Kremlin.

The Kremlin is keen to avoid repeating that experience, but will continue to massage the results to make sure United Russia clears some key thresholds. In the last Duma elections the results were massaged upwards to ensure that United Russia won just over half of all the popular vote. Another key hurdle is to ensure that United Russia has a clear majority on all the key Duma committees where the laws are actually made, thus giving the Kremlin direct control over the process of drafting laws, as well as the ability to pass legislation.

The more Russians that can be persuaded to vote for United Russia, the smaller the fix needed to clear these thresholds.

Putin sought on June 19 to give Russia's ruling party a pre-election boost by promising to spend big on infrastructure, education and health. Putin proposed extending an infrastructure loans programme until 2026 and a RUB100bn ($1.4bn) pandemic recovery programme.

"People's well-being is of the highest value," he said.

He also pledged more funds for road construction and reiterated his support for a ban on exports of some kinds of timber from January 1. 2022.

The government also extended a highly successful and popular mortgage subsidy programme for another year on July 1, although the terms were trimmed. Under the programme all mortgage interest rates above 6.5% are subsidised by the state.

The programme has caused a boom in home sales and now mortgages make up the bulk of funding for buying on the primary housing market. The Central Bank of Russia (CBR) is even worried about the formation of a housing bubble, as so many Russians have taken advantage of the scheme, which has been driving up home prices in the major cities.

President Vladimir Putin announced on June 4 modifications to the state subsidised mortgage programme during his address to the St Petersburg International Economic Forum (SPIEF). It is to be prolonged for one year but sees a 50bp rate increase to 7%, while the mortgage limits are cut from RUB12mn in the Moscow and St Petersburg metropolitan areas and RUB6mn in other regions to RUB3mn for all areas.

The mortgage programme also doubled up as a very effective anti-crisis measure. The subsidised mortgage lending attracted over RUB2 trillion ($146.4bn) into housing construction, and over 500,000 families took out the loans, Putin said at SPIEF.

The new spending promise comes in addition to RUB400bn ($5.5bn) of extra social spending that the president already promised during his State of the Nation speech earlier this year.

Putin made the promises during a United Russia Party congress on June 18, where he praised United Russia for its "ability to renew and constantly develop".

The spending promise comes as a salve to falling real incomes that have declined almost continuously for eight years and seen average incomes drop by about a quarter in real terms since the start of last decade – the same time as the military modernisation drive started.

That has hurt United Russia’s support and its ratings are at a multi-year low, according to a poll by the Levada Center, an independent pollster. It showed just 27% of Russians supported the party in March, down from 31% in August.

And both spending programmes are in addition to the RUB27 trillion that is to be spent as part of the 12 national projects programme that is supposed to “transform” Russia. That programme was launched in 2018 but has got off to a slow start and has been further hindered by the coronacrisis. The national projects programme was originally slated to be completed by 2024, the year of the next presidential elections, but has since been delayed to 2030. Putin had the constitution changed earlier this year so that he can stand again in 2024 and stay on until 2036 if he feels it necessary.

The government also released a list of the leaders of the United Russia party, headed by Russian Defence Minister Sergei Shoigu, with Russian Foreign Minister Sergei Lavrov in second place.

These are the two heaviest hitters in Russian domestic politics and Shoigu in particular is popular with Russians, as he is seen as competent and clean. Russia’s military has been effective in the fight against terrorism in Syria – Russia’s first overseas operation since the end of the Cold War – and the military is now seen as powerful again since Putin launched a major modernisation drive in 2011, largely overseen by Shoigu.

Shoigu is also closely linked to Putin and the two men regularly holiday together – the source of the Putin’s bare-chested pictures – and were most recently on a macho camping trip in Siberia.

However, Shoigu is unlikely to leave his post as Minister of Defence if elected to the Duma.

Lavrov’s inclusion suggested to some that the experienced and highly competent foreign minister may be allowed to retire following the elections, something he is widely believed to have been requesting for several years already.

"I'm sure that United Russia sets the highest bar for itself, which is to confirm its leadership position and to clinch a win at the elections," he said.

Notably former President and Russian Prime Minister Dmitry Medvedev’s name was not on the list. Medvedev has made himself unpopular with several gaffes and also his wealth, estimated to be over $1bn, was exposed by jailed anti-corruption activist and opposition politician Alexei Navalny in a documentary. Included in the expose was a mansion with a pond and a luxury duck house that has led to protesters bring ducks to protests to ridicule Medvedev.

Putin’s name was also not included on the list. Although it has been suggested several times, Putin has always kept a certain distance from the party.

The Russian government can easily afford the extra spending, as federal budget revenues have grown faster than expected this year.

Analysts were speculating that Putin would announce a bigger spending package in his State of the Nation speech, but with typical caution the Ministry of Finance has eased the purse strings slowly in order to preserve Putin’s fiscal fortress, seen as a key strategic weapon in the showdown with Washington.

However, the federal budget execution report for the first five months of this year shows that expenditures have remained elevated compared with the seasonal pattern, but revenues have been even higher year to date.

After a deep recession during the coronacrisis and the first budget deficits in almost a decade, the federal budget is back in surplus and topped RUB300bn on the back of Russia's roaring recovery of economic activity and the brisk restoration of oil & gas revenues thanks to higher than anticipated oil prices. Moreover, the Ministry of Finance has at least RUB1 trillion left over from funds that were not spent last year, but included in the budget.

Even with this increased spending VTB Capital (VTBC) economists expect Russia to end this year with a budget surplus of RUB200bn-RUB400bn, of 0.2-0.6% GDP, whereas the current budget law implies a RUB2.8 trillion, or a 2.4% GDP deficit for 2021.