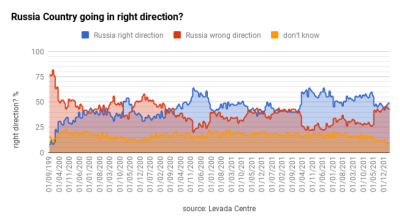 Russian president Vladimir Putin's popularity was up to 66% in April, closely followed by regional governors' 61%
By bne IntelliNews April 27, 2019

The mood of the population in Russia improved in April as approval ratings rose mildly across the board, according to the latest political polls from independent pollster the Levada Center, with the increase in approval of regional governors being the most noticable winner.

Russian President Vladimir Putin’s approval rating was up to 66% in April, according to Levada, from 64% a month earlier, but still down from the sky-high 82% in April last year.

Putin’s rating was the highest it has been this year as he slowly starts to shake off hits he took following the hike in VAT rates by 2pp to 20% that came into effect in January and the increase in retirement ages imposed last summer.

The approval of both the government and the Duma also rose to their highest levels this year, 42% and 39% respectively, but in both cases the institutions are underwater with the public as the disproval rates of both are higher: 56% and 59% respectively. And both approval ratings are slightly down from the 47% and 43% from April a year earlier.

As reported by bne IntelliNews, the situation in the regions has improved a lot in the last two years after Russia came close to a serious regional debt crisis in 2016. The aggregate regional budgets turned in a profit last year for the first time in 11 years and the Ministry of Finance just moved to take “manual control” over the most indebted regions' debt issuance plans as the central government continues to reform Russia’s finances.

Finally the patchy good news fed through to sending the “Russia moving in the right direction” indicator up by one point to 49% in April, its best result this year, but still down from 60% in April last year.

This article is from bne IntelliNews Russia monthly country report. Sign up to receive the report to your inbox each month, covering the slow moving macro- and micro-economic trends, the major political news and a roundup of the main sectors and corporate news. The first month is free and you can unsubscribe at any time.