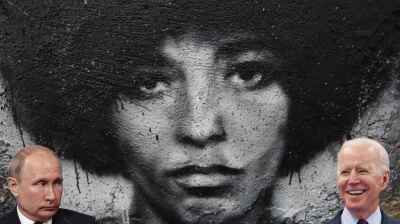 Putin remembers huge portraits of black activist and US Communist Party member Angela Davis on display in the USSR. / Wiki
By Ben Aris in Berlin October 8, 2020

Russian President Vladimir Putin said that the Kremlin was much closer to the US Democratic Party than the Republicans, as it has lots of “shared values” thanks to Russia’s Soviet past.

Observers have speculated that the Kremlin is going into damage control mode as it looks increasingly likely that the Joe Biden, the Democratic candidate in the US presidential due in November, will walk home to a victory over incumbent US President Donald Trump. A Biden administration is widely expected to be much more assertive towards Russia than Trump has been.

Putin has already tried to head off some of the Russia hysteria that is increasingly used for domestic political purposes in the US by suggesting a “mutual non-interference” pact in each other's elections in September.

“One of the main strategic challenges of our time is the risk of a large-scale confrontation in the digital sphere,” Putin said in the Kremlin statement. “We would like to once again appeal to the United States with a proposal to approve a comprehensive programme of practical measures to reset our relations in the use of information and communication technologies (ICT).”

Putin said that the Kremlin has had no response to this proposal.

The Kremlin appears to be increasingly worried that relations with the US that are already very bad are about to take a big turn for the worse and that the Biden campaign is already locking itself into a tough stance on Russia before he even manages to get elected president.

“We hear rather sharp anti-Russian rhetoric from Biden,” Putin said in a long interview on October 7. “Sadly, we now used to it. But something worth mentioning: The Democratic Party is traditionally closer to so-called liberal values, to social democratic ideas, if compared to Europe. It was from the social democratic environment that Communist Party evolved.”

Putin went on to point out that he grew up under communism and was a rank and file member of the party for 18 years before the collapse of the Soviet Union.

“I believed in the party’s ideas. I still like many of these left-wing values: equality and fraternity. What is bad about them?” Putin asked.

Then in a obvious appeal to American voters Putin made statements that appeared to have been crafted to appeal to some of the main voting groups in the US elections.

He kicked off with a somewhat bizarre parallel between communist ideology and Christianity, whose adherents make up the largest part of the voting public in the US.

“In fact, [communist values] are akin to Christian values. Yes, they are difficult to implement, but they are very attractive, nevertheless. In other words, this can be seen as an ideological basis for developing contacts with the Democratic representative,” Putin said.

After dealing with conservative Christians Putin moved on to the African-American population and even cited black rights activist Angela Davis.

“It's a fact that African Americans constitute a stable electorate, one of the electorates of Democratic Party. The Soviet Union also supported African Americans’ movement for their legitimate rights. Back in the 1930s, Communist International leaders wrote that both black and white workers had a common enemy – imperialism and capitalism,” a link Putin suggested that Russians still share.

“People of my generation remember when huge portraits of Angela Davis, member of US Communist Party, an ardent fighter for rights of African-Americans, were on view around USSR. We believe that it's something we can talk about, that can be used as the basis for mutual understanding.”

One area the two leaders do have in common is a desire to restart the Strategic Arms Reduction Treaty (START) missile treaty negotiations. The current treaty, that limits the signatory’s ability to produce new missiles, is due to expire in February.

"Joe Biden has said openly that he is ready to extend the new START treaty or to sign a new strategic offensive reductions treaty. This is a very serious element of our potential collaboration in the future,” Putin said.

It is one of the major security treaties signed with the US during the Cold War that is still relevant today and acts to prevent the start of a new arms race. The Kremlin is keen to preserve the START treaty and has asked the White House to begin negotiations on several occasions, requests that have been ignored until now.

What makes Russia nervous is the US unilaterally withdrew from the Anti-Ballistic Missile Treaty (ABM) in 2002 that limits the deployment of short-range missiles in Europe and then followed up with plans for a “missile shield” in Europe to guard against attacks by “rogue states.” While the unpredictable North Korea was officially named as the genesis for the need for a missile shield, the deployment of the new missile has so far all been on Russia’s border, in Romania and Poland.

The upshot of the US decision to ditch the ABM was Putin’s decision to modernise the Russian army beginning in 2012, which has kicked off what is starting to look like a Cold War II after Russia annexed Crimea in 2014 and then went to Syrian President Bashar al-Assad's aid in Syria.

Putin’s outreach to Biden and the Democrats is likely to fall on stony ground, as on the whole the Democrats have been hard on Russia.

Biden has used Russophobe language in his campaign, calling for donations to re-elect him so that he can “fight Russia” and calling Putin out by name.

Former president Barak Obama reached out to Russia with a reset that was sold by his then Secretary of State Hilary Clinton, but the initiative failed. Obama and Putin did not get on personally and under Obama the US foreign policy line became increasingly hard.

Clinton in particular took a very hard line on Russia, comparing it the Soviet Union, and the Kremlin dreaded the prospect of her becoming the next president in the 2016 election.

And Biden has more experience than most US politicians of Eastern Europe. He flew to Kyiv and gave a speech to the Ukrainian Rada calling on deputies to do their “historic duty” and make reforms so the country could stand up to Russia. He has also been in Tbilisi as a show of solidarity following the short war Georgia fought against Russia in 2008.

More recently, Biden has come out in vocal support for the people of Belarus who are protesting against Belarus' self-appointed President Alexander Lukashenko’s massive falsification of the August 9 presidential elections. Moreover, his tweets use the Belarusian transliterations of the names of the main actors rather than the Russian versions – for example “Lukashenka” instead of the almost universal “Lukashenko” –  which is unusual and a sign that he has experienced advisors for Eastern Europe already in place.