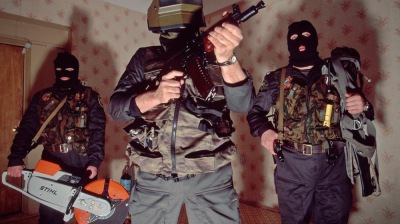 The Russian tax police take their job very seriously. Russia's President Putin has increasing income taxes for the first time in his 20 years in office
By Ben Aris in Berlin November 24, 2020

One of the first things that Russian President Vladimir Putin did on taking office in 2000 was to slash tax rates to a flat 13% for personal income, one of the lowest rates in Europe, and 24% corporate profit tax.

In the previous decade the government under President Boris Yeltsin struggled to collect enough taxes to cover the budget expenditure. Part of the problem was a hugely complicated system being operated by a government that was in continual crisis. Putin massively simplified the system, which quickly improved collection.

The low rates of taxes were also designed to bring more people into the system, as previously taxes were so high that it became routine to avoid paying. “Under the table” and “brown envelope” schemes for paying wages were universally used by firms. At the same time, for corporates the chaotic ad hoc single-issue amendments to the taxes to deal with specific problems led on occasion to some firms being asked to pay over 100% of their profit as tax. The upshot was the creation of a “virtual economy” based on barter, where firms avoided dealing with money entirely. Once Putin cut the rates and the system simplified, companies “went white” over the course of the following years and thus realised one of Putin’s major early successful reforms.

More recently the tax system was transformed again by Prime Minister Mikhail Mishustin, who previously ran the tax service where he oversaw a huge reform of the IT system that closed down many of the last remaining schemes. The reform saw the tax take increase by 20%, although the tax burden only rose by 2% in the same period.

However, thanks to the economic stagnation that started in 2011, compounded by multiple external shocks, of which the coronacrisis is only the latest, the government is short of money again and casting around for new revenue streams.

The VAT rate was already hiked from 18% to 20% in January 2019 and more recently the mineral extraction tax (MET) has been comprehensively reformed to more efficiently tax the extraction of metals and hydrocarbons.

Following these changes, the Kremlin has now arrived at the point where it has taken the very first step at introducing progressive income taxes on the population, but so far it is treading very cautiously.

Putin made the announcement in a televised address in late June, a week before the country was due to vote on controversial amendments to the constitution that paved the way for the president to stay in power potentially until 2036.

The reform is expected to generate an additional RUB60bn, the president said, adding that the money would go towards funding treatment for children with "severe and rare" illnesses.

The "new quality of administration, the introduction of digital technologies, it has become possible to distribute the tax burden in a more differentiated way," Putin said in his comments.